After the launch of the Go and Pop ranges members yesterday, Alcatel just announced the OneTouch Idol 3C and OneTouch Pixi First smartphones. The also unveiled OneTouch Pixi 3 (10) tablet is another addition to the family of already innumerable Pixi devices.

The OneTouch Idol 3C is Alcatel’s best equipped model we’ve seen at IFA and it is in fact specced almost the same as the OneTouch Idol 3 (5.5). The Idol 3C borrows the 5.5-inch FullHD IPS panel of the Idol 3 and puts it a new body with interchangeable covers in bright colors. Even the fully reversible nature of the Idol 3 has been kept, so you shouldn’t worry whether you pick up the phone mic-side up when answering a call in the dark.

Underneath the covers ticks the Snapdragon 615, its dual quad-core CPU clocked at 1.5GHz and 1.0GHz respectively. 2GB of RAM and 16GB of built-in storage shape up the same package as the single-SIM version of the Idol 3 (5.5). The primary camera consists of a 13MP sensor housed behind a five-element f/2.0 lens, and the front cam is an 8MP fixed-focus affair.There’s multi-band 2G/3G, as well as Cat.4 LTE, while local connectivity covers Wi-Fi a/b/g/n, Bluetooth 4.1, and NFC. A GPS receiver is also on board with A-GPS, and the FM radio even has RDS. Battery capacity is 2,910mAh, and if the specific number rings a bell, refer to the Idol 3C spec page.

At the other end of the spectrum we find the OneTouch Pixi First. It’s a humble 4 inches in diagonal, with a 800×480 pixels resolution. Powered by a Spreadtrum SC7731 chipset with a 1.2GHz quad-core CPU, paired with 512MB or RAM, the Pixi First won’t win any performance awards. Thankfully, the meagre 4GB of internal storage can be expanded by popping in a microSD card. 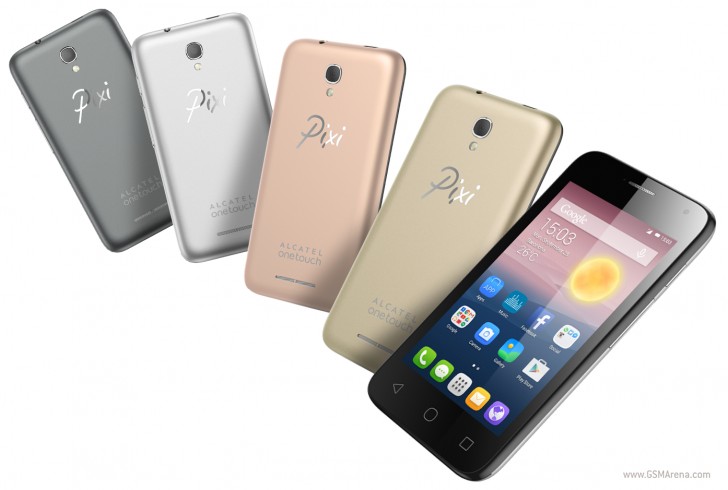 The smartphone comes with a 5MP/2MP camera combo, both fixed-focus, but it does have a flash on the back. Cellular connectivity is limited to 2G/3G only, and there will be a dual-SIM version as well. You do get Wi-Fi b/g/n and Bluetooth, though in a somewhat ancient 2.1 version.

There’s also GPS and an FM radio – Alcatel seems to include the feature throughout its lineup. Battery capacity is a modest 1,450mAh. The physical dimensions are 122. X 64.4 x 9.7mm.

The Alcatel OneTouch Pixi 3 (10) is the largest slate to join the Pixi tablet lineup. Much like Pixi 3 (8), the 10-incher comes with 1,280×800 pixels resolution, but on this diagonal it results in an even lower pixel density of 149ppi.

The Mediatek MT8127 chipset is in charge with a 1.3GHz dual-core processor and a single gig of RAM. Internal storage is 16GB and the microSD slot takes cards up to 64GB. A basic 5MP/2MP camera duo is on board as a last resort.