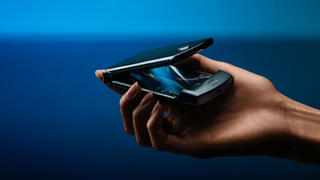 UPDATE: We have received an official statement from Motorola regarding the screen peeling issue discussed in this story – you can find out what the phone maker has to say in the updated story below.

Following concerns raised yesterday surrounding the durability of the Samsung Galaxy Z Flip’s screen, the emerging foldable phone category has taken yet another hit, with one user reporting a catastrophic screen peeling issue on the new Motorola Razr.

Following only a week of use, Input’s Raymond Wong noticed the laminate covering his Razr’s display had become detached from the screen along the foldable phone’s crease, leaving behind a bubble across the entire width of the device. [via The Verge]

According to Wong, the screen peeling occurred at some point during a 45-minute train ride while the Motorola Razr was stored within his pocket.

“I have no idea how it happened, but I can promise you it wasn’t from impact; the phone was closed in my front jeans pocket the entire ride and there’s no visible damage anywhere on the device,” said Wong.

To make matters worse, Wong says the damage isn’t solely cosmetic – the section of touchscreen within the warped area has expectedly been affected by the damage, making “touches and taps virtually unresponsive, especially when tapping things in a list like inside the Settings app,”

As to what might have caused the screen peeling, Wong is uncertain, though he does posit the theory that changes in temperature may have “triggered some kind of reaction that might have loosened the adhesive.”

In response to the above story, Motorola has contacted us with an official statement on the matter:

“We have full confidence in razr’s display, and do not expect consumers to experience display peeling as a result of normal use. As part of its development process, razr underwent extreme temperature testing. As with any mobile phone, Motorola recommends not storing (e.g., in a car) your phone in temperatures below -4 degrees Fahrenheit [-20 degrees Celsius] and above 140 degrees Fahrenheit [60 degrees Celsius]. If consumers experience device failure related to weather during normal use, and not as a result of abuse or misuse, it will be covered under our standard warranty.”