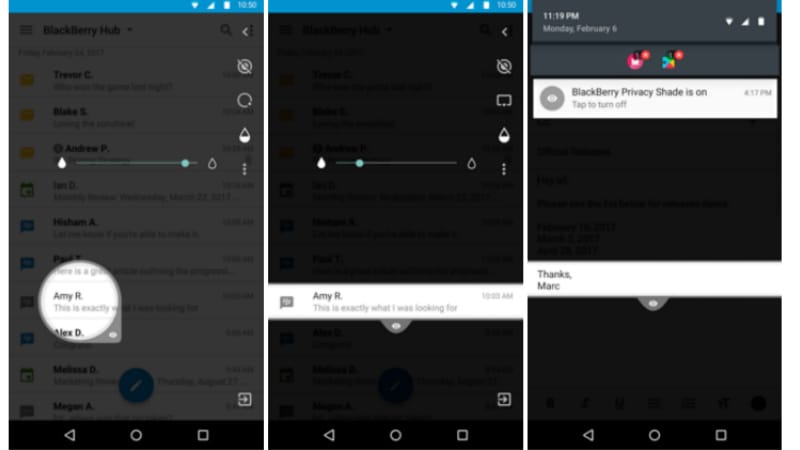 HIGHLIGHTS
Privacy Shade app is only available for BlackBerry users
It helps in avoiding others from snooping into your phone
The app darkens entire screen except for a small view area
While laptop makers have introduced several workarounds to avoid nosy eyes from peeking from behind, smartphones haven’t really been able to address that pain point. Users, especially with large smartphone screens, have always found people (particularly the nosy ones) leaning over to read that personal text or see what you’re browsing. BlackBerry is trying to address this woe by launching an app called Privacy Shade.

The Android app makes the entire screen dark, except for a small view area that can be moved around to what you really want to read on the screen. The viewing area can change shapes from a bar to a circle, depending on what you prefer. Furthermore, the transparency of the darkened screen can also be manually adjusted, so for those who are extra paranoid, they could maximise the shade to near opaque for optimal privacy.
It is worth noting that this app is only available only to BlackBerry devices, so not all users will be able to take advantage of the nifty app. You can check if you own a compatible Blackberry device by trying to download it from the Google Play Store, or you can also sideload it from APK Mirror. Downloading from APK Mirror doesn’t lift the restriction limit of BlackBerry devices, Android Police reports.

BB Merah Putih, the company that currently holds the right to manufacture and sell BlackBerry smartphones in Indonesia, recently launched the BlackBerry Aurora smartphone for the country. The dual-SIM (Micro-SIM) based BlackBerry Aurora runs Android 7.0 Nougat out-of-the-box and sports a 5.5-inch (720×1280 pixels) display. It is priced at IDR 3,499,000 (roughly Rs. 17,400) in Indonesia.