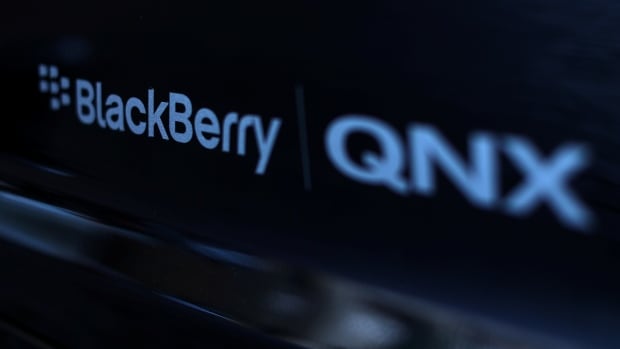 An automobile running Blackberry QNX software is shown during the Milken Institute Global Conference in Beverly Hills, Calif., in this May 2, 2017, photo. (Mike Blake/Reuters)

BlackBerry Ltd. shares have been on a hot streak — rising more than 60 per cent in recent weeks — and one technology analyst thinks some of the company’s new products have the potential to help push the stock to $45 US in three years.

In a recent report, Gus Papageorgiou, associate director of technology research at Macquarie Capital Partners, pointed to two BlackBerry products — its Radar system for monitoring truck trailers and containers, and the QNX operating software system used to run vehicle systems — as drivers of the company’s future.

The Radar system can monitor the load status of a truck trailer, its location, and whether the doors are open or closed, among other things. That can help shipping companies better manage their trailers. Papageorgiou says some early customers are reporting a 17 per cent reduction in the number of trailers they require, along with opportunities to charge customers who hold on to trailers too long.

Meanwhile, BlackBerry QNX currently dominates the infotainment software market for vehicles with an estimated market share of 50 per cent, Papageorgiou’s report says. The software runs in about 60 million vehicles.

Last year, Ford Motor Co. signed a deal with BlackBerry to ramp up the installation of QNX in its vehicles. Ford and BlackBerry also reached an agreement to shift up to 400 workers to the automaker to bolster its efforts to develop a self-driving car.

“I think these are very healthy markets where they have advantages,” Papageorgiou said in a recent interview with Dianne Buckner for CBC News Network’s On the Money. “The business they’re getting into is highly recurring software business with high margins, so I think there is potential here.”

A former leader in the smartphone business, BlackBerry’s fortunes tumbled amidst strong competition in the handset market. The battered company has since been trying to reinvent itself with a new focus on software.

The company’s stock has been on the rise of late, hitting levels not seen in four years. Since the end of March, it has gone from under $10 on the TSX to close Thursday at $15.12. On Nasdaq, the stock closed at $11.22 US, up from about $7 US at the end of March.

Papageorgiou said the Radar and QNX innovations could contribute $2 billion or more in software revenue in three years, and earnings per share of about $1.80. Based on a price-earning multiple of 25, that translates to a stock price of $45, he says.

Given the volatile nature of the technology market, it’s not clear cut that things will play out in favour of BlackBerry. A recent article in Forbes pointed out that both Apple and Google’s parent company, Alphabet, have been showing interest in the automotive market.

Apple has been reported to be working on its own operating systems for a self-driving car, while Alphabet has launched its own Android Automotive infotainment system. Both firms have massive resources to throw at automotive projects.