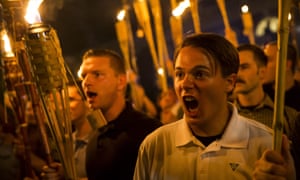 Hundreds of far-right demonstrators wielded torches as they marched on to the University of Virginia campus in Charlottesville on Friday night and reportedly attacked a much smaller group of counter-protesters who had linked arms around a statue of Thomas Jefferson.

Starting at a municipal park less than a mile away, “alt-right” protesters who have gathered for the weekend Unite the Right rally marched in a long column over the short distance to the campus, chanting slogans like “You will not replace us” and “Blood and soil”.

When the marchers reached and surrounded the counter-protesters there was a short verbal confrontation. Counter-protesters claimed they were then attacked with swung torches, pepper spray and lighter fluid.

Emily Gorcenski was among the protesters who said they were hit with the mace spray. “[They] completely surrounded us and wouldn’t let us out.”

She said police did not intervene until long after the rightwing marchers had struck out at protesters. “I saw hundreds of people chanting Nazi slogans and police do nothing.”

Charlottesville police did not respond immediately to requests for comment.

Two male protesters who said they were also maced, and did not wish to be named, described far-right protesters moving from verbal abuse, to pushing and shoving protesters, to the noxious spray.

“Someone from the alt right maced me right in the face – unprovoked,” said one. “After they maced people they started punching people and hitting them with torches.” Several protesters said a woman using a wheelchair was among those sprayed.

Just up the street from the fracas, a community prayer meeting was held in St Paul’s memorial church, addressed by several preachers including prominent civil rights leader Dr Cornel West. The end of the service overlapped with the torch parade and many people waited for long periods before leaving citing safety concerns.

In an interview, West said: “The crypto-fascists, the neofascists, the neo-Nazis now feel so empowered, not just by Trump but by the whole shift in the nation towards scapegoats.

“I don’t like this talk about ‘alt-right’, that’s an unnecessary abstraction. These are neofascists in contemporary garb.”

On Saturday the small college city will face down a full scale Unite the Right rally, which is predicted to be the country’s largest in a decade.

Far-right monitoring groups estimate that between 500 and 1,000 people and 30 prominent speakers and groups will descend on the downtown area for the Saturday afternoon event, organised by local rightwing activist and former Daily Caller writer Jason Kessler.