Just a day after Motorola and Verizon sent out press invites for a joint event centred around “the newest Droids,” the former has accidentally confirmed the existence of the Droid Maxx 2 smartphone. It’s worth mentioning that Google had recently confirmed that the device will be Verizon’s Moto X Play. 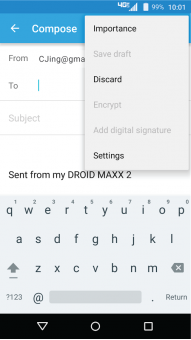 Motorola yesterday launched a stock email client, dubbed Moto Email, on Google Play. Among the screenshots accompanying the app’s Play Store listing was an image (shown above) where-in the sender’s signature read, “Sent from my DROID MAXX 2.” A quick look at the listing now reveals that the image in question has been removed.

As multiple Droid-branded phones are to be announced at the October 27 event, we are also expecting the companies to unveil the Droid Turbo 2 (which also has an international variant dubbed the Moto X Force).