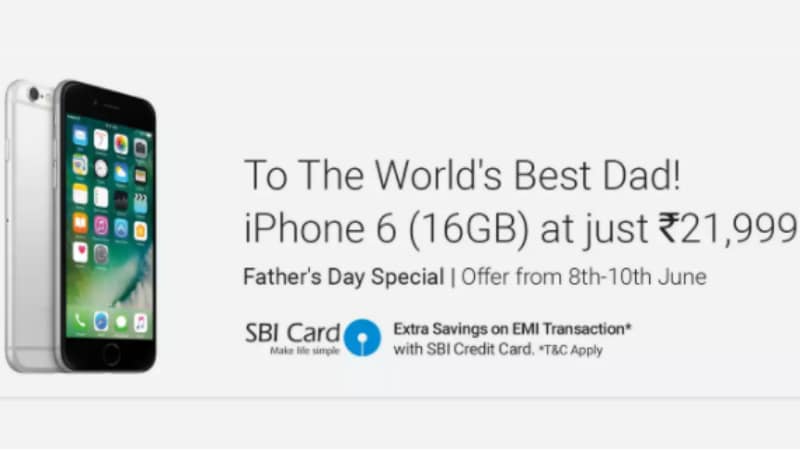 Flipkart is offering the iPhone 6 with 16GB storage at Rs. 21,990 as part of its Father’s Day promotion, as it had teased previously. The offer starts Thursday, June 8 and lasts till June 10; Father’s Day is on June 18. Notably, the Flipkart iPhone 6 16GB offer is available only for the Space Grey model, and not the Gold and Silver ones. The price drop is accompanied by smartphone exchange offer of up to Rs. 15,000. The e-commerce company is also offering a No Cost EMI option for SBI card holders, and a 5 percent off on Axis Bank Buzz credit cards as well.

Interestingly, the iPhone SE 32GB model is also available at Rs. 21,990 on Flipkart. This variant has double the storage, was launched last year (iPhone 6 was launched in 2014), and has a faster processor than iPhone 6. On the other hand, iPhone SE sports a relatively smaller 4-inch display compared to the 4.7-inch screen of iPhone 6. It is also available with exchange discount of up to Rs. 15,000.

Another iPhone model you can consider besides the special price iPhone 6 16GB and iPhone SE 32GB is the 32GB iPhone 6 in Space Grey colour, which is available on Flipkart at Rs. 25,999 with exchange discount of up to Rs. 15,000. Notably, the listing pages for both iPhone 6 32GB and iPhone SE mention “Special Discount Ending Soon,” so these prices may not last long.

The iPhone 6 has a 4.7-inch (750×1334 pixel) screen, and is 6.9mm thick. The phone has high-speed Wi-Fi 802.11ac support and support the TD 2300 LTE band used in India. iPhone 6 has an 8-megapixel rear camera and a 1.2-megapixel front camera, with improved sensors when compared with the iPhone 5s. The phones feature the new Apple A8 processor and a motion co-processor labelled M8. Apple promises that both devices will provide better battery life than the iPhone 5s.