Rumors of Huawei’s P9 series are slowly building up speed. The Huawei P9max, codenamed P950S, passed through AnTuTu, revealing some interesting specs. Its predecessor, theHuawei P8max, had a massive 6.8″ 1080p screen, but the P9max will be different.

The benchmark detected 1,600 x 2,560px resolution. That’s much sharper and points to a 16:10 screen. It will be a smaller screen though, its diagonal was an estimated 6.2″. Note that benchmark estimations are not very accurate. Still, it can’t be 0.6″, can it? 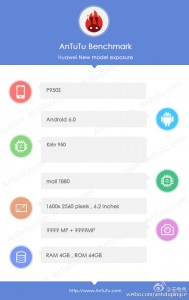 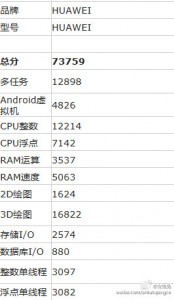 Anyway, the Huawei P9max will be powered by the new Kirin 950 chipset, paired with 4GB RAM and 64GB storage. The benchmark scores were lower than other K950 scores so this must be an early version of the software. The software was based on Android 6.0 Marshmallow.

The P9 family may sport a dual-camera setup on its back, but there’s relatively little info about it.
[“source-gsmarena”]