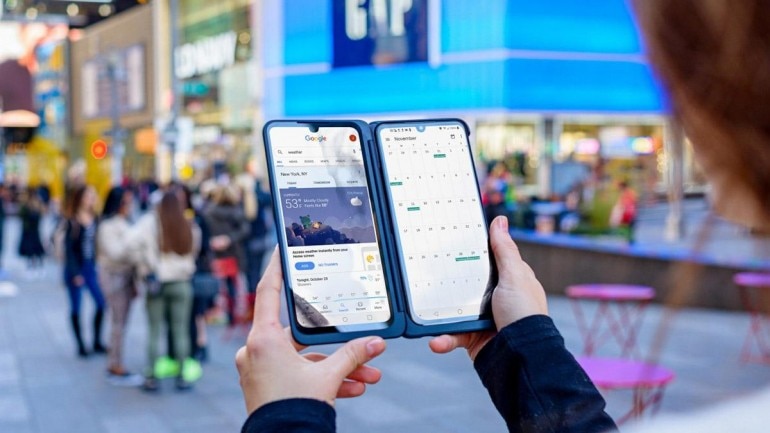 LG launched the LG G8 ThinQ successor – the LG G8x ThinQ – at IFA 2019 in September this year. Now, nearly three-and-a-half months later, the company has launched the phone in India. The LG G8x ThinQ costs Rs 49,999 in India and it will be available for sale in the country starting Saturday, December 21, 2019.

Before we talk about the specs, let me give you a brief background about the phone. The LG G8x ThinQ succeedes the LG G8 ThinQ and the LG G8s ThinQ that was launched in India back in October (REVIEW). Although it is a G-series smartphone, it resembles the LG V50 ThinQ more in terms of the design owing to its dual-screen design. In case you aren’t sure, it comes with two screens that are attached using hinges. The good news is that if you get bored of the second screen, you can remove it easily while continuing the G8x ThinQ as a regular smartphone.

Now let’s talk about the specifications.

The LG G8x ThinQ comes with a 6.4-inch FHD plus OLED FullVision with a resolution of 2340 x 1080 pixels. The main device is attached to a second screen with a similar resolution and a 2.1-inch mono display in the front that displays information such as date, time and battery life and notifcations. The hinged mechanism allows users to use the phone at an angle of 360-degrees. LG says that the phone is ideal to be used as a game controller at 120-degree angle, a mini-laptop at 140-degree angle, flat at 180-degree angle and a stand or tent at 270-degree angle among other things. It comes with an in-Display fingerprint sensor and it is protected by IP68 dust and water resistant technology. Like all of LG’s flagship phones, it is MIL-STD 810G compliant.

The phone is powered by Qualcomm’s Snapdragon 855 processor that is couple with 6GB RAM and 128GB storage space that can be expanded further using a 2TB microSD card. It runs on Android 9.0 Pie.

The phone comes with a dual-rear camera setup consisting of a 12MP standard and a 13MP super-wide angle lens. On the front the phone has a 32MP standard lens. The phone features 4G LTE, Wi-Fi 802.11, Bluetooth 5.0, NFC and USB Type-C for connectivity and has Perfectly balanced stereo speakers, boombox speaker, Hi-Fi Quad DAC, DTS:X 3D and HDR 10 for enhanced audio and video performance.

As far as the battery is concerned, it comes with a gigantic 4,000mAh battery and it features support for Qualcomm’s Quick Charge 3.0 technology.

In India the LG G8x ThinQ is available in Aurora Black colour variant only.