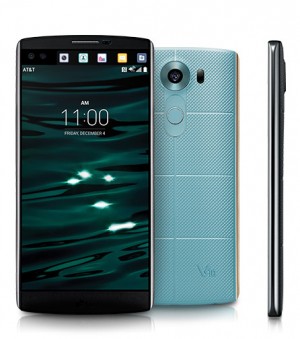 The recently unveiled LG V10 is now almost ready to make its debut in the US, through a couple of carriers. The companies in question are AT&T and T-Mobile. Previously we have heard that Verizon would be selling the V10too, but Big Red hasn’t announced its launch plans yet.

AT&T will begin taking online orders for the LG V10 on October 27, which is tomorrow. The phone will become available in stores on November 6. The carrier will have the device in Space Black and Opal Blue. You’ll need to pay $249.99 for it if you go with a new two-year contract. Otherwise you can choose one of AT&T’s Next installment plans, shelling out nothing upfront, and then paying either $23.34 per month for 30 months, $29.17 for two years, or $35 for 20 months.

T-Mobile will start its online orders for the V10 on October 28, one day later than AT&T. That said, the magenta carrier will have the handset in stores on October 30, which is around a week before AT&T. T-Mobile is offering the V10 for $0 down and 24 monthly payments of $25, adding up to a full retail price of $599.99.

The LG V10 has a dual front camera setup, as well as a secondary ticker display positioned directly above the main touchscreen. It also comes with a 16 MP rear camera, 4GB of RAM, Qualcomm’s Snapdragon 808 chipset, and a 3,000 mAh battery. It runs Android 5.1.1 Lollipop.

If you buy yours from AT&T, for a limited time you can also receive a free 200GB microSD card, as well as an extra battery and a battery charging cradle.
[“source-gsmarena”]