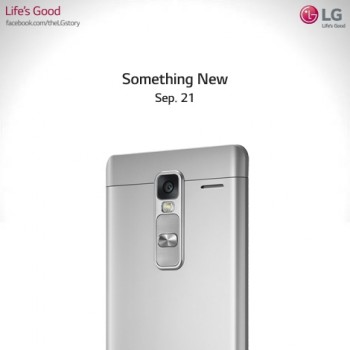 Yesterday a previously unknown LG phablet was spotted in a benchmark’s database, rocking mid-range specs and a 5.7-inch touchscreen. Back then it was known only by its model number, H740, but today more information about it has leaked.

It’s supposedly going to be released as the LG Class, and the Korean company is already teasing its announcement through its social media channels. As you can see from the teaser image to the left, the Class is set to become official on September 21, which is next Monday.

Interestingly, LG has opted for a fully metallic construction of the smartphone, despite the fact that it’s not a premium offering (thus somewhat mirroring what Samsung’s been doing with its Galaxy A series).

The trademark back-mounted buttons are where you’d expect them to be, yet the whole design is more blocky than LG’s past products. The LG Class (or H740) is expected to come with a 5.7-inch 1080p touchscreen, a 12 or 13 MP rear camera with LED flash, a 5 MP selfie cam, 2GB of RAM, 8GB of (probably expandable) storage, all the usual connectivity options, and Qualcomm’s Snapdragon 615 chipset at the helm. It will run Android 5.1.1 Lollipop.

LG’s also holding an event in New York City on October 1, yet that may be reserved for the company’s future flagship device.