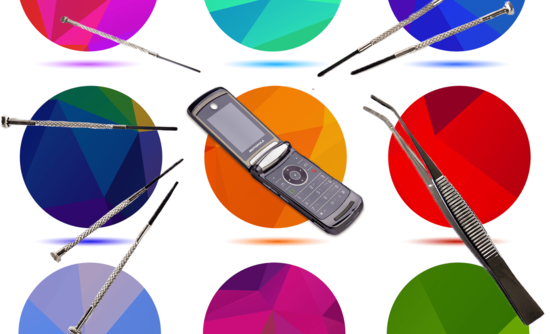 We’ve all been there: the frustration of a cracked phone screen, malfunctioning USB port or flickering laptop display leaves us at the mercy of a chipper so-called genius. A seemingly minor hardware problem often forces the choice between a pricey, time-consuming repair or simply replacing the device entirely.

This decision between replace and repair contributes to the 50 million metric tons of e-waste that will be generated this year, according to the European Waste Electrical and Electronic Equipment (WEEE) Forum. Only about 20 percent of it will be recycled. The rest is landfilled, burned or illegally disposed of, despite about two-thirds of the world’s population being covered by legislation for responsible end-of-life device handling of e-waste.

Companies such as Dell, Best Buy and Apple have programs in place to increase product takeback, ensuring valuable materials contained in e-waste — copper, palladium and gold, to name three — can be reused in future products, or at least are properly recycled. Many also capitalize on secondary markets by remanufacturing or refurbishing used products and reselling them at a deep discount. But product repair and life extension — particularly when a consumer still owns the product — is a bit of an ugly stepsister for circularity in consumer electronics.

It’s no secret that manufacturers have an incentive to push new products, and planned obsolescence is nothing new in our society. OEMs have more innocent approaches such as upgrade programs and complex product design or proprietary repair tools, as well as more aggressive tactics, such as criminalizing and voiding warranties when unauthorized individuals make repairs, and actively lobbying against legislation that might increase product repairability. But some companies are beginning to rethink this linear model.

Product repair and life extension — particularly when a consumer still owns the product — is a bit of an ugly stepsister for circularity in consumer electronics.

Last week, telecommunications company Motorola expanded its product line from cell phones and laptops to include DIY repair kits for its mobile devices, marking a significant shift towards increasing its products’ circularity. In a partnership with iFixit, a wiki-based site that teaches people how to fix almost anything, Motorola has begun selling replacement parts, tools and instructions directly to customers for all of its recent phones. This is a big deal.

Independent repair is common within categories such as home appliance and automobiles, but not so much for consumer electronics. Many celebrate the leadership of Fairphone, a modular mobile phone with repair instructions pre-loaded onto the device. But Motorola is the first global smartphone company to offer this service.

“Motorola recognizes that this is a way to improve the experience for their consumers,” iFixit CEO Kyle Wiens told me. While customers may buy products with less frequency, Motorola is betting that increased repair options will build brand loyalty. According to Wiens, a recent survey of iFixit users found that 95 percent of consumers say that a successful repair makes them more likely to buy another product from that manufacturer. And let’s not forget: Motorola is making money selling the repair kits, too.

“Everybody should have the ability to repair their own things,” Wiens said. “Whether or not they choose to do so should be up to them. I think of it as a portfolio of options: You should be able to send your phone into Motorola and have them fix it, they should have local repair options in major cities or you can do it yourself at home. Each of those options is going to cater to a different kind of person. … Brands are going to have to meet customers where they’re at.”

The debate around the “right to repair,” a movement that asserts companies should be legally obligated to offer the tools, parts, schematics and diagnostics necessary to fix things that customers own, is a touchy subject for manufacturers across industries. Regardless of whether Motorola’s move is a harbinger of repair’s rise, product life extension nonetheless will become a meaningful strategy for implementing circularity at scale.