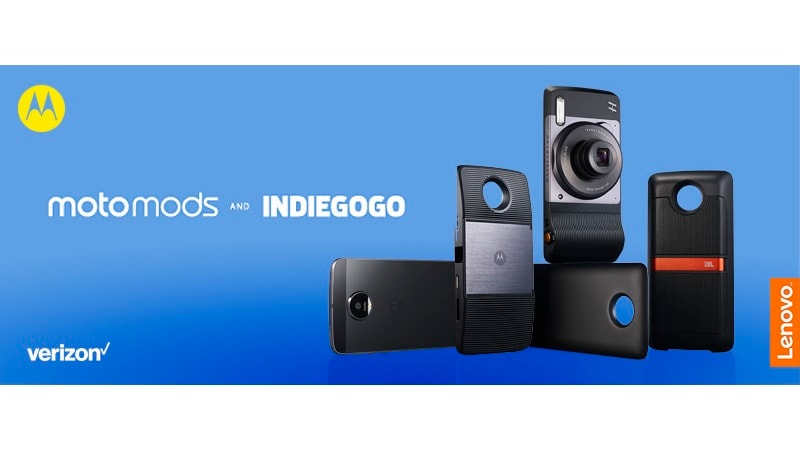 Motorola Partners Indiegogo to Help Developers Fund Their Moto Mods Ideas
HIGHLIGHTS
Winners of contest will meet Moto Mods development team
Hackathons will start from December
Moto Mods Developer contest open till January 31 next year
Motorola has shown its faith in Moto Mods and consistently showcased the utilities that they bring along to the smartphones. Even though LG G5’s modular concept was not able to live up to users’ expectations, Lenovo’s implementation has received a rather warm response from customers. Now, Lenovo has tied up with Indiegogo to help developers raise funds for their Moto Mods ideas.

When the company introduced Moto Mods, it had unveiled a Moto Mod Development Kit (MDK) for companies to be able to develop mods, and soon opened it out to more regions. Now, the company is evidently looking to consumers or smaller manufacturers to create Moto Mods as well, with the launch of the Indiegogo campaign.

In order to get funds for their ideas, developers have to take part in company’s Moto Mods Developer contest and submit their ideas for the mods before January 31, 2016. The winners of the contest will get a Moto Z smartphone and a Moto Mods Development Kit.

The winners will be selected by company’s panel and will get a trip to Chicago to meet the executive development team behind Moto Mods. In order to sign up for the competition, participants need to head to company’s submission page.

Motorola has also announced that the company will be organising Moto Mods hackathons, starting with New York from December, in order to help people bring their ideas for mods forward. In order to register for the hackathon, interested participants need to head to the company’s website.

The company has further said that if an idea for Moto Mods really impresses it, Lenovo Capital has set aside $1 million (roughly Rs. 6.67 crores) to ensure that this idea is transformed into an actual mod for the phones.