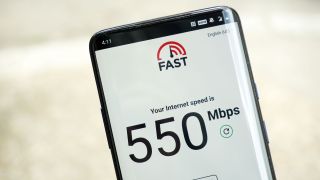 With 5G set to be the ‘next big thing’ in the world of smartphones (especially when it comes to the bombardment of marketing messages from networks) brands are already vying to be seen as providing the fastest, best and sleekest models out there.

An early blow in the battle has been set by the OnePlus 7 Pro 5G, as the Chinese brand’s phone has beaten challengers from Samsung, Oppo and LG to offer the fastest speeds over a 5G connection in London, UK.

The 7 Pro 5G managed nearly 700Mbps download speeds when running on EE – the first network to unveil 5G in the UK – and that’s mighty fast compared to the average 4G speeds of around 30Mbps, and 6Mbps for 4G in the same region.

It is worth noting that as these networks get more congested with users, these speeds may fluctuate, but it’s still an impressive number from the OnePlus phone.

According to OnePlus, Rootmetrics undertook the test which took the readings on four phones – the Samsung Galaxy S10 5G, the LG V50, the Oppo Reno 5G and the OnePlus 7 Pro 5G – in static locations in the UK capital.

The same results should be seen worldwide, although we’re waiting to see similar tests in high-traffic 5G zones outside of the UK.

So how does it compare?

That’s quite the disparity, so we spoke to all the brands to see if they could explain the findings a little more. We’ve currently only heard from OnePlus (unsurprisingly), who told TechRadar that increasing 5G speeds had been one of the goals for it’s new high-end phone:

“With the OnePlus 7 Pro 5G we redesigned the 5G antenna, adopted a totally different internal design using a stacked PCB to allow for the additional 5G hardware, and added an expanded cooling system,” a spokesperson told us.

OnePlus also confirmed extra effort with Qualcomm, the brand which supplies the 5G modem, and the networks to optimise the performance of the phone in 5G speed testing.

We’ve asked the other brands listed in the test to comment on the findings, as both LG and Samsung have high proficiency and longevity in the world of making compact and speedy phones, and Oppo shares a parent company with OnePlus, and often packs similar technologies, and we’ll update this article with their responses.

What does this mean for you?

The key thing with 5G technology is not that it’s faster (although it is, clearly) but that the latency and reliability is stronger than previous connection types.

The aim is that phones running on 5G tech will have more stable and instant connections, even at places like sporting events or gigs where usually the networks crumble from the weight of so many people trying to connect in one dense area.

So while these speeds are impressive, what we need to see is how these networks perform under high traffic from many 5G users, and right now we’re not seeing a huge amount of 5G take up.

That said, we’ve had some decent news in the past few weeks on how 5G is going to affect our pockets: Vodafone is keeping prices down (but capping speeds) where Three is going to keep the prices the same.

We’re keeping an eye on the top 5G phone deals around right now, so when the price comes down and people really start stress-testing these networks, it will be interesting to see if the promise of 5G really comes to life.