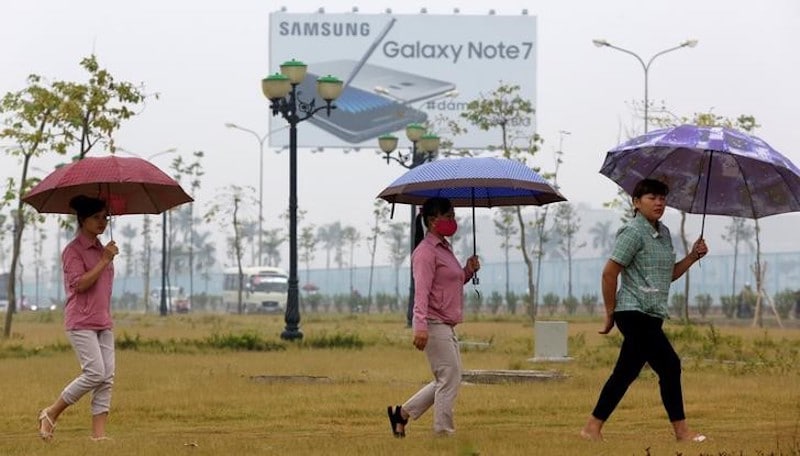 As Samsung Electronics struggles to salvage its reputation after the safety problems that have beset its flagship Galaxy Note 7 smartphone, the South Korean company can at least bank on an army of Vietnamese workers for support.

Tens of thousands of them are involved in assembling more than a third of Samsung’s smartphones – the Galaxy Note 7 included – in the Pho Yen area of Thai Nguyen province, which is about 65 kilometre north of the Vietnamese capital Hanoi. Samsung’s arrival three years ago transformed it from a sleepy farming district into a sprawling industrial town.

While the company expects to take a profit hit of around $5 billion from the scrapping of the fire-prone phone, 13 workers interviewed by Reuters outside the factory almost all said they are confident their employer will pull through. They also say Samsung pays well, offers good benefits and takes care of their needs.”Recalling (Galaxy Note 7) doesn’t mean we are unemployed or such; Samsung also makes many other phones and new models, not just the Galaxy Note 7,” said Nguyen Thi Hang, one of some 110,000 Vietnamese who work for Samsung Electronics across Vietnam, making it one of the nation’s biggest employers.

The Samsung factory workers get around $180 in monthly base salary, which can grow to around $300 when overtime, annual incentives and other benefits are included. That is well above average incomes in such rural areas.

Young workers are also drawn to the Thai Nguyen jobs by generous benefits, including subsidised or free meals, and accommodation that cost less than $3 a month. There are also organised sports, karaoke and discounts on various products and services, such as Samsung phones and hair salons.

Nguyen Van Doai, 27, a worker at the plant, said some overtime options had been reduced due to the Galaxy Note 7 withdrawal, but there was no indication of job cuts.

(Also see: Samsung Galaxy Note 7 Explosion Cause to Be Revealed in the ‘Coming Weeks’)

“Samsung hasn’t reached a level where they have to cut jobs because they are still hiring many people and constructing more buildings,” Doai said.

Samsung Vietnam said on Wednesday there would be no job cuts this year as a result of the end of its production of the Galaxy Note 7, and its exports for 2016 would still grow as it ramps up production of other models.

Samsung village
Samsung has invested $14.5 billion in Vietnam, according to Vietnam’s Association of Foreign Invested Enterprises, equivalent to 10 percent of the country’s total foreign investment over the past three decades. The attractions for Samsung include relative political stability, tax breaks and lower labor costs than in China.

For those who don’t live on the site, the company provides transport. Every day, thousands of Vietnamese are ferried to and from their homes in Hanoi and other cities and towns in the region in a procession of buses to the sprawling factories in Thai Nguyen and Bac Ninh provinces. In a corner of the capital on Thursday, workers queued at daybreak to board 14 of around a hundred factory-bound buses, some still emblazoned with advertisements for the Galaxy Note 7.

But there are some workers and people running local businesses who are not convinced Samsung’s Vietnam operations will emerge unscathed.

Dentist Phung Minh Ngoc, who moved to Thai Nguyen from Hanoi a year ago to set up a clinic named “Rang Xinh Samsung” (Pretty Tooth Samsung), fears the Galaxy Note 7 fallout could hurt his business.

“Their sales will certainly fall and so jobs for workers will lessen and workers’ salaries may also decrease,” he said.

One female worker at the Pho Yen factory, who declined to be named, said she was worried because her contract was up for renewal next month.

“I just brought my baby here with me. If I couldn’t work for Samsung any longer, I would have to go back to farming,” she said.