The Sony Xperia Z5 and the Xperia Z5 Compact are now official. The new generation “mainstream” flagship and its pocket-friendlier brother were just announced at a press event two days before the IFA expo opens to the public.

The regular-sized Xperia Z5 comes with the familiar 5.2-inch diagonal established with the Z2, and the Z5 Compact retains the 4.6 inches of the last Z3 Compact. The Z5 has a FullHD panel with a 428ppi density, while the Compact sticks to 720p resolution, resulting in 323ppi. Both displays are IPS units with the TRILUMINOUS and X-reality technologies inside and undisclosed make chemical tempered glass on top.

The mighty Snapdragon 810 powers both smartphones with a dual quad-core CPU, ticking at up to 2GHz, and Adreno 430 GPU. You get 3GB of RAM on the vanilla model, but only 2GB on the Compact. Both models will have 32GB of built-in storage, though the Compact may ship with half than in certain markets. The microSD slot is universally available, though. The entire Xperia Z5 family will run on Android 5.1.1 upon launch.

Number one on the new features list is the 23MP camera. It uses a custom-made sensor, exclusive to Sony, housed behind a 24mm-equivalent f/2.0 lens. The sensor’s effective area is actually larger, as we’ll try to explain, and you’ll be able to shoot 23MP images in 4:3 aspect or 20MP in 16:9. The camera app has been thoroughly redesigned as well for a more contemporary look and improved usability.

The Xperia Z5 bears a strong resemblance to the previous model, but a few new design elements clearly set it apart. Chief among those is the reworked power button, now doubling as a fingerprint sensor. The now aluminum frame has an Xperia logo engraved on the side, while a frosted back panel replaces the glossy predecessor, aiming to put an end to smudgy backs and to achieve a more unified look between front and sides.

Measuring 146mm x 72mm x 7.3mm, the Z5 is identical to the Z3 in terms of dimensions and thus marginally thicker than the Z3+. Weighing in at 154g it’s heavier than either of the two older generations, but its battery is smaller, at 2,900mAh. Both have IP68 certification for the lineup’s signature dust and water resistance. 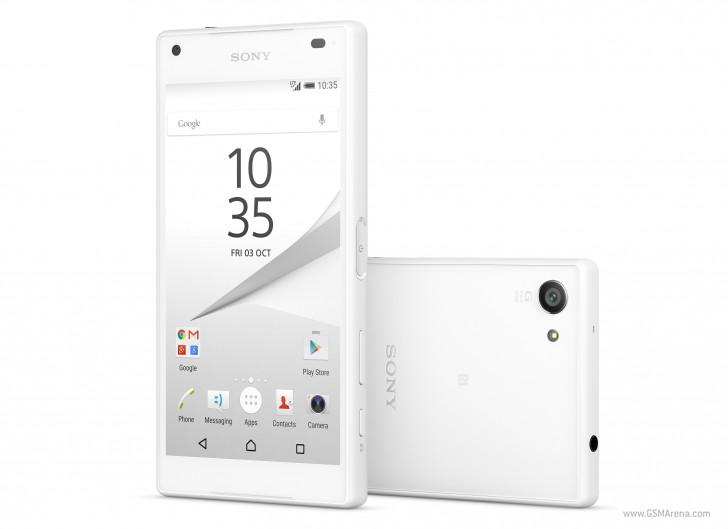 The Xperia Z5 Compact shares the fingerprint sensor and the Xperia logo in the frame but looks a lot chunkier. It measures 127mm x 65mm x 8.9mm so it’s not really thin, it’s just that the Z3 Compact did a much better job at masking its waistline. The 138g of heft are justified here by the 2,700mAh cell capacity.

The Sony Xperia Z5 will be available in the more formal White and Graphite Black, but also Gold and Green, while the Z5 Compact spices things up with Yellow and Coral. The smartphones will be on store shelves globally starting in October, but pricing remains to be detailed.