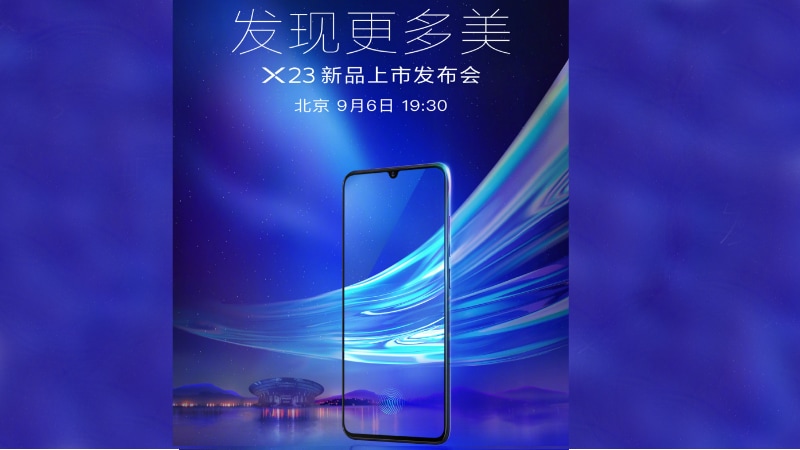 The Vivo X23 went official last week in China, with the official website in the region taking reservations as well. Now, the company has announced that the Vivo X23 will be launched on September 6. This means that the pricing and availability of the smartphone will be announced next week. The Vivo X23 was also spotted on GeekBench, tipping a few specifications as well. To recall, its predecessor Vivo X21 was made official in March this year and came to India just two months ago. Key highlights of the Vivo X23 include a waterdrop display notch and a vertical dual camera setup at the back.

Vivo, on its official Weibo page, shared a poster revealing the launch date of the Vivo X23. The smartphone is set to launch in China on September 6, with no word on launch timeline for international markets. The Vivo X21 was launched in India some months after its launch in China, and we can expect the same trend to be followed for the Vivo X23 as well.

In any case, the Vivo X23, as mentioned, is already listed on the China website revealing key information about the smartphone. It sports a screen to body ratio of 91.2 percent, a 3D premium gradient finish glass panel design in varied colour options, a fourth generation in-display fingerprint scanner, a vertical dual camera setup, and a waterdrop-shaped display notch. The listing on the China website suggests that the Vivo X23 will be made available in Purple and Blue colour options.