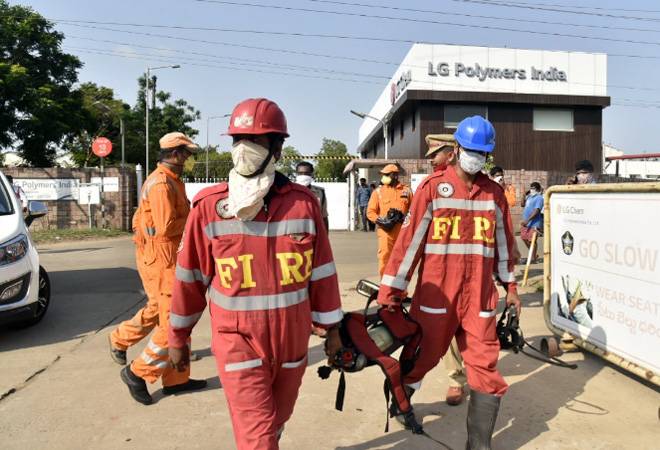 Andhra Pradesh government officials say all follow up safeguard measures are being taken at the LG Polymers plant on the outskirts of Vizag from where gas leaked on May 7 killing 11 people and leaving hundreds hospitalised. The affected storage tank has been isolated and there is no chemical reaction taking place within, according to the officials. Therefore chances of any gas leak is unlikely, they say. Only the temperature of the tank is still high and it is being cooled with constant water spray. The temperature has started coming down.

Other than the affected tank, there are three other tanks in the unit; styrene liquid is stored in two and one is not in use. The company has been instructed by the authorities to evacuate both the storage tanks for precaution. The company has started the process and it should be done in a day or two, according to R Karikal Valaven, the state special chief secretary (industries and commerce).

In the tank from which the leak occurred, the styrene liquid underwent an autopolymersation reaction which generated heat and led to the gas leak.  A high-level committee constituted to probe the gas leak is investigating the case further. It held a meeting on Sunday, May 10. The team comprises of special chief of environment and forests, industries secretary, pollution control board secretary, district collector and the city commissioner of police.

While the gas travelled upto 1.5 km, the state government says, precautionary measures have been taken in a 5 km radius of the plant and monitored by the local municipal authority and the district collectorate. Precautions include not milking cows that have grazed in the region and not consuming vegetables grown in the area. Gas vapours that escaped and caused damage were heavier than air and spread at ground level damaging all vegetation on its path. About 350 people are hospitalised, with 28 of them in ICUs (intensive care units). Some have been discharged.

The LG Polymers unit has been around in its current form since 1997. It was first established in 1961 as Hindustan Polymers for manufacturing Polystyrene and its Co-polymers at Visakhapatnam, India.

It later merged with McDowell & Co. Ltd. of UB Group in 1978. Subsequently, LG Chem of South Korea  took over Hindustan Polymers and renamed it as LG Polymers India Private Limited (LGPI) in July, 1997.  The company is in the Styrenics business and is a leading manufacturer of polystyrene and expandable polystyrene in India.