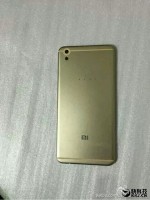 The Xiaomi Mi 5 launch is a month away, but production should already be underway. The metallic frame of a Mi 5 has been photographed (well, allegedly).

It shows a design much like that of an iPhone 6 or an HTC One A9 – a metal shell with rounded sides and visible lines near the top and bottom edge.

Interestingly, there’s an angle that shows a regular microUSB, even though Xiaomi has already ventured into Type-C with the Mi 4c.

Anyway, the Xiaomi Mi 5 is expected to come in two versions – the basic one with a flat screen and one with a curved screen, both options coming with a choice of two storage capacities.The price will range from $335 to $470 based on screen and storage.