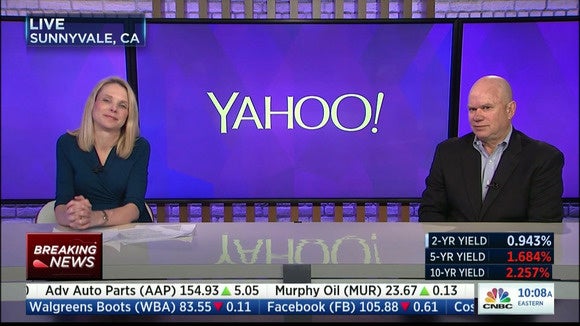 Yahoo announced today that it has abandoned a plan to spin off its $31 billion stake in Alibaba, a popular Chinese e-commerce company, and would instead spin off all of its other assets into a new company. The move is called a reverse spinoff.

The company said in a statement that concerns over a massive tax liability connected to an Alibaba spinoff forced them to nix that idea.

“Informed by our intimate familiarity with Yahoo’s unique circumstances, the board remains committed to accomplishing the significant business purposes and shareholder benefits that can be realized by separating the Alibaba stake from the rest of Yahoo,” said Maynard Webb, chairman of Yahoo’s board of directors. “To achieve this, we will now focus our efforts on the reverse spin off plan.”

Webb emphasized in an interview on CNBC this morning that Yahoo’s plan to spin off its core Internet business into a separate company does not mean it is actively trying to sell that business.

However, if a good offer comes along, the company would consider it. “The board has a fiduciary obligation to look at any good offer,” Webb said. “We are not proactively trying to do any of that.”

After weeks of speculation that Yahoo CEO Marissa Mayer might be forced out after not making enough headway in turning the company around in her three and a half years at the helm, it appears that her position is solid … at least for now.

The board did not make an announcement connected to Mayer and she specifically mentioned her alignment with the board in this morning’s conference call.

“Today I’m leading a very different company than the one I started at,” Mayer said, adding that the company today has better products, more modern advertising offerings and more focused employees. “I remain aligned with our board and our management team. We’re focused on shipping great products and features. I remain convinced that Yahoo is on a better path and the right one.”

Webb also took a direct question on CNBC about Mayer staying with the company.

“Absolutely,” he said. “I’ve never met anybody who works harder, is smarter and cares more. We want to help her return this company to an iconic place where it belongs. We have hundreds of millions of consumers that use our products every day, and we strive to make those products better and we need to find a way to capture that value and increase it. And I’m convinced we can.”

Mayer also said she’s “happy with the achievements” that the company has made under her leadership. She specifically pointed to moves she has made in mobile, video and social media.

“In addition to our efforts to increase value and diminish uncertainty for investors, the ultimate separation of our Alibaba stake will be important to our continued business transformation,” Mayer said. “In 2016, we will tighten our focus and prioritize investments to drive profitability and long-term growth. A separation from our Alibaba stake, via the reverse spin, will provide more transparency into the value of Yahoo’s business.”

Yahoo’s Chief Financial Officer Ken Goldman, also on the call this morning, said that spinning off Yahoo’s core Internet business is expected to require third-party consents, shareholder approval and filings and clearance from the Securities and Exchange Commission.

He also said the reverse spinoff could take a year or more to complete.