Alcatel has already announced a myriad of smartphones at IFA, with even more to come, we’ve been told. On top of that there’s also a smartwatch, running a proprietary OS.

The OneTouch Pop Up is the highest-specced of the lineup and is powered by the Qualcomm Snapdragon 610 (MSM8929) with an octa-core processor clocked at up to 1.4GHz. There are 2GB of RAM on board and the built-in storage is 16GB, expandable via microSD.

The display is a 5-inch IPS unit with 720p resolution and 5-finger multi touch support. The primary camera is a 13MP shooter with a sensor size of 1/3.06”, f/2.0 lens aperture and an LED flash. On the front there is a 5MP fixed-focus selfie snapper.

There’s a reasonable connectivity suite, which includes multi-band 2G/3G/4G radios, Wi-Fi b/g/n, Bluetooth 4.0 and GPS and the smartphones also have an FM radio receiver. It’s a dual-SIM dual-standby smartphone with a battery capacity is 2,000mAh.

The OneTouch Pop Star comes in two distinct versions, one limited to 3G networks only, the other supporting Cat.4 LTE on top. The differences boil down to chipset and height (oddly), with the 3G version sporting a Mediatek MT6580 and measuring 141 x 71.5 x 8.6mm, while the 4G employs the MT6735P SoC and is 1.5mm taller.

Either model comes with a single gig of RAM and 8GB of expandable storage. Imaging department is a bit more modestly equipped with only an 8MP primary camera, still with an LED flash. The 5MP FF front snapper is kept as well. Interestingly, the 3G version can shoot 1080p videos, while the 4G variant is capped at 720p. 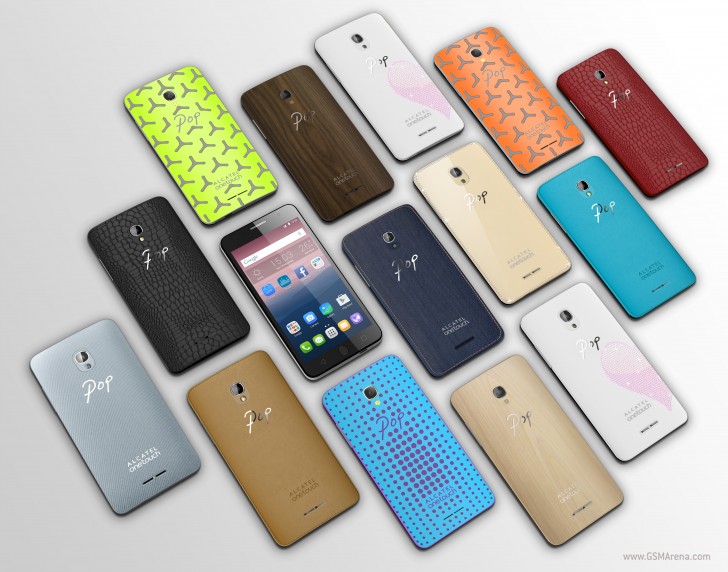 The display is again 5 inches in diagonal with HD resolution, though alcatel quotes it as Full Lamination, which means there’s no separate touch sensor layer, thus resulting in a thinner glass/touch sensor/display assembly.

Cellular connectivity aside, both versions support Wi-Fi b/g/n, Bluetooth 4.0 and GPS and FM radio reception. Battery capacity is again 2,000mAh, with a quoted charging time of 3 hours. Dual-SIM versions will also be available.

The Pop Star may be low on specs, but is certainly strong on customizability and will be offered with a wide range of back covers. The number of options is so large that they’re grouped into entire collections. There’s the Funky collection with “psychedelic designs” (presumably the neon-colored ones), the Leather collection (not actual leather), the Fashion collection, and the wood-like Nature-ECO collection.

Then comes the OneTouch Go Play smartphone which boasts an IP67 certification for protection against the elements. Alcatel also claims it’s shockproof, though this is harder to quantify.

The specsheet lists a Snapdragon 410 chipset, 1GB of RAM, and 8GB of storage, thankfully expandable. The display is a 5-inch 720p TFT panel. It has the same 8MP/5MP camera combo as the Pop Star, with 1080p video recording. 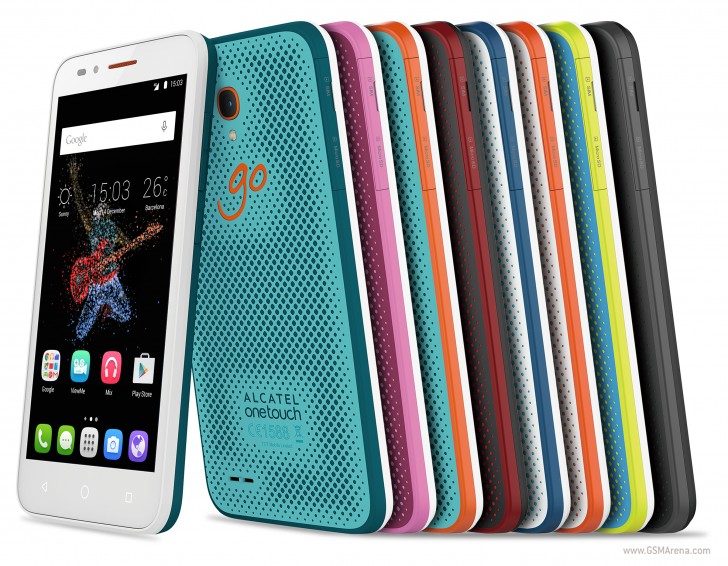 Alcatel is not new to the smartwatch world having already launched its OneTouch Watch, but is now expanding its portfolio with a more rugged Casio G-shock-style Go Watch. Pegged as the perfect companion in underwater activities for the Go Play smartphone, that’s where the Go Watch borrows most of its design cues.

The Go Watch is powered by a modest 180MHz Cortex-M4 CPU and features a 1.22-inch IPS display with (240 x 204), and its flat-tire nature is masked by the rugged bezel. The wearable measures 50.5mm in diameter and is 13mm thick, while the wristband is 22mm wide. Alcatel promises 2-5 days of battery life out of the 225mAh cell.

The smartwatch has most of the features you would expect, including a heart rate sensor and a vibration motor for notifications, as well as a gyro sensor and accelerometer, but adds an altimeter on top of all these. It runs on a proprietary OS, so no immediate access to Android Wear apps. It is, however, compatible with both Android smartphones, running Jelly Bean 4.3 and up, and Apple devices with iOS7 or newer.

You can check out our hands-on report on the Alcatels, while we’re waiting for a few more promised announcements.