Just a day after it was certified by China’s Telecommunication Equipment Certification Center (TENAA), the Samsung SM-W2016 – which is alleged to be the Golden Galaxy 3 flip phone – has cleared the FCC hurdle, too. 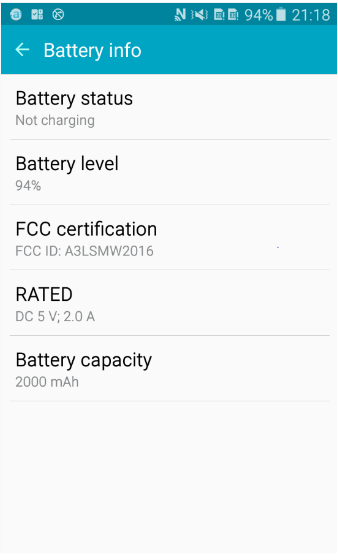 Unfortunately, like TENAA, the FCC listing also does not include any images of the device, although there’s a screenshot of the handset’s settings (shown above) revealing that the smartphone packs in a 2,000 mAh battery.

For those who aren’t already aware, the TENAA listing revealed an octa-core 2.1GHz processor, 3.9-inch internal and external (768×1280 pixel) displays, 3GB/64GB memory, 16MP/5MP camera combo, and Android 5.1.1 Lollipop. As for the price, the device was spotted listed on Zauba carrying a tag of around $400
[“source-gsmarena”]