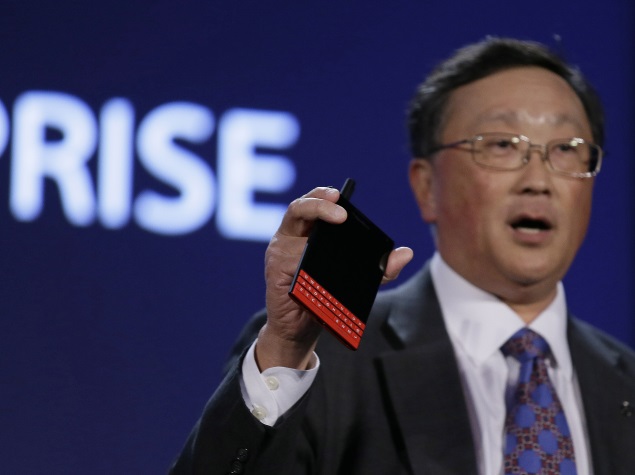 The promotion was announced late Monday and will be available starting next month until February 13, in Canada and the United States.

Customers who trade in their iPhones could receive up to $400 cash back depending on the model and condition of their trade-in, plus a $150 gift card.

This marks the first time that BlackBerry has gone head-to-head with Apple since the Canadian firm launched a turnaround plan last year aimed at stemming massive losses.

The BlackBerry Passport was launched in September.

Named for its approximate size to the travel document, the phone was designed to win back key corporate users after BlackBerry was effectively knocked out of the highly competitive consumer smartphone market dominated by Apple and Samsung.

In September, BlackBerry reported it narrowed its loss in the latest quarter, and expressed optimism that its major restructuring and new business-friendly devices would help fuel a turnaround.

For the three months ended August 30, BlackBerry posted a loss of $207 million on $916 billion (roughly Rs. 56,66,788 crores) in revenues largely split between sales of services and software and more than two million smartphones.

The Canadian manufacturer pioneered the smartphone market but has struggled to keep up with competitors in recent years.

Last year, the company introduced the BlackBerry 10 operating system and new smartphones in an effort to regain ground lost to rivals such as Apple and others using the Google Inc’s Android operating system.