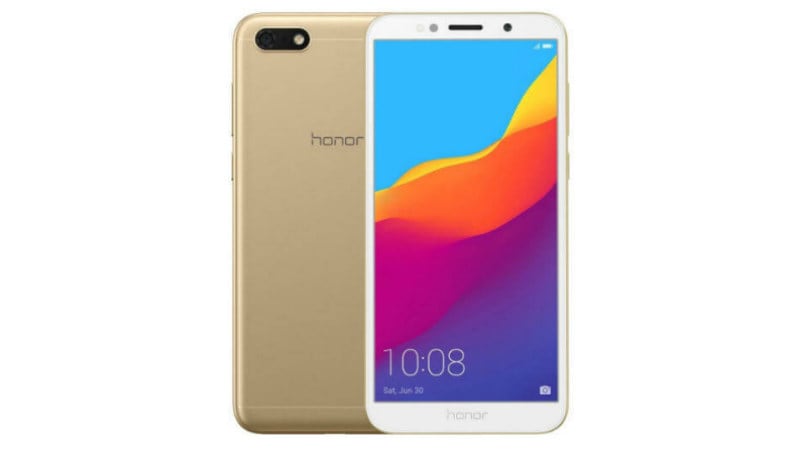 Huawei brand Honor appears to be all set to expand its affordable smartphone range by launching the Honor 7S. The new smartphone has reached China’s TENAA for certification. Also, its press renders have been leaked by a German source. All this suggests that Honor 7S could soon make its way to markets, at least in China and some European regions. The emergence of the new smartphone notably comes days after the Chinese brand launched the Honor 7A with entry-level specifications and an affordable price of CNY 799 (approximately Rs. 8,400).

As per the listing on the TENAA site, the Honor 7S has dual-SIM support along with 4G LTE connectivity. The handset received the certification from the authority on April 18 with model number DUA-TL00. While the TENAA listing doesn’t reveal any specifications of the upcoming Honor model, folks at WinFuture.de reveal its key specifications and claim that the handset will debut with a price tag of just over GBP 100 (approximately Rs. 9,060). It is also said to come in Black, Blue, and Champagne Gold colour options.

The leaked renders by WinFuture.de don’t show any major difference if we compare them with the renders of the Honor 7A. You can spot Honor’s branding on the front and back of the smartphone, and the thin bezels are making it look like a high-end model.

On the specifications front, the dual-SIM (Nano) Honor 7S is said to have a 5.45-inch IPS HD+ (720×1280 pixels) IPS display with 295ppi of pixel density and runs Android 8.0 Oreo-based EMUI 8.0. It is reported to be powered by a quad-core MediaTek MT6739 SoC, coupled with 2GB of RAM. Further, the handset is claimed to have a single 13-megapixel camera sensor on the back, while a 5-megapixel sensor is available on the front. Both sensors have an LED flash to illuminate shots under low light.

For storing content, it is reported that the Honor 7S has 16GB of onboard storage that is expandable via microSD card (up to 128GB) with a dedicated slot. The smartphone is also said to have Wi-Fi, Bluetooth v4.2, NFC, and a Micro-USB port on the connectivity front and a rear-facing fingerprint sensor. It also has a facial unlock feature, similar to what debuted on Honor 7X last year and is also available on the budget Honor 7A and Honor 7C. Besides, the smartphone packs a 3020mAh battery and weighs 142 grams, according to its leaked report.

We need to wait for the official announcement to see how the rumoured Honor 7S will sit against the competition.