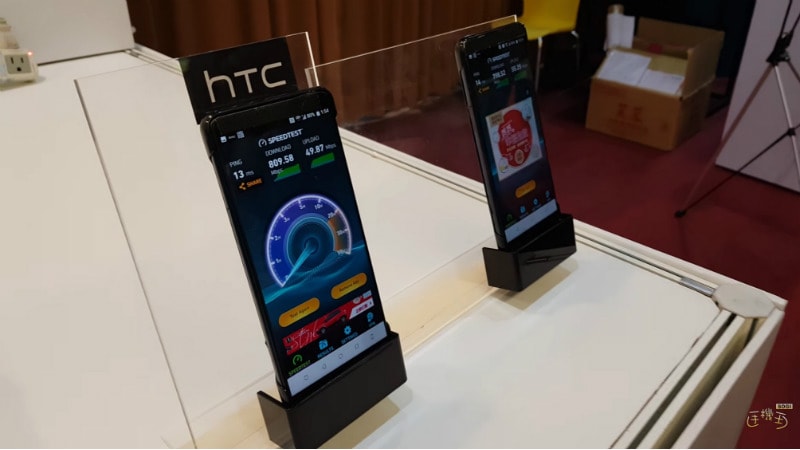 While HTC may have plans to limit the number of smartphone releases this year, it is quite likely that the Taiwanese company will at least upgrade its previous flagship with a new model that could debut as the HTC U12. But ahead of any official confirmation, a combination of new reports indicate that the company might have showcased the phone during a 5G event held by a local carrier in Taiwan.

HTC hasn’t acknowledged that the smartphone showcased at the 5G event is its upcoming flagship. However, renowned tipster Evan Blass through his Twitter account, @evleaks, states that the model in question is apparently the HTC U12, codenamed HTC Imagine. If we look at the images provided from the event, the alleged HTC U12 could sport a thin-bezel display with an 18:9 aspect ratio. Earlier rumours have suggested the smartphone will have a 4K display, and a recent render suggested that there might be an iris scanner on the front, instead of a fingerprint sensor – matching the ongoing trend of offering facial recognition features on flagship smartphones.

Although HTC didn’t reveal any details about the smartphone it previewed at the 5G event, it did mention that the particular handset is capable of delivering download speeds of 809.58 Mbps, close to 1Gbps. It appears that there is a Qualcomm Snapdragon 845 under the hood with X20 LTE modem that supports download speeds of up to 1.2Gbps. This again points to the U12 as the company will likely to prefer opting the top-most SoC specifically for its next flagship offering.

As per a report by Taiwanese publication Sogi, HTC said that the new smartphone with fast data access would be launched sometime this year. The company didn’t mention any details about its plans for the U12 flagship, though.