HTC may have been the first company to craft the first commercial Android smartphone, but more than a decade later, it has been reduced to merely a memory. While Taiwanese company did manage to release a few smartphones – the HTC U12 series and the “Exodus 1” blockchain-focussed smartphone – in 2018, poor sales may almost testify that HTC may be on the verge of dying – if not already dead. It’s official Twitter handle for the U.S., which has been inactive for over a month, echoes this belief. But the company may not want to think that, just yet.

Recently, HTC sprung back from a night of deep sleep to inform its patrons that it is working on two key developments. The first one is 5G and the other is its second-generation blockchain phone. Additionally, HTC also plans to expand its footprint in the blockchain and digital asset management ecosystem to make the best out of the two emerging technologies.

Recently, HTC revealed its plans to unveil its 5G Mobile Smart Hub, which is basically a portable Wi-Fi router leveraging a 5G connection. It also has a 5-inch HD touchscreen to display speed and allow management of entertaining content, games, etc. The 5G Mobile Smart Hub was first unveiled at  MWC 2019 and HTC’s recent tweet suggests that we can expect a commercial launch soon. For the launch, HTC could be partnering with telecom operators such as Sprint in the U.S., EE and Three UK in the UK, Telstra in Australia, Elisa in Finland, Sunrise in Switzerland, and Deutsche Telekom in Germany.

If we’re supposed to take a company’s happenings on Twitter as a sign of internal happenings, then I suppose very little is happening over at HTC. Spotted by a user on reddit, the company’s main… 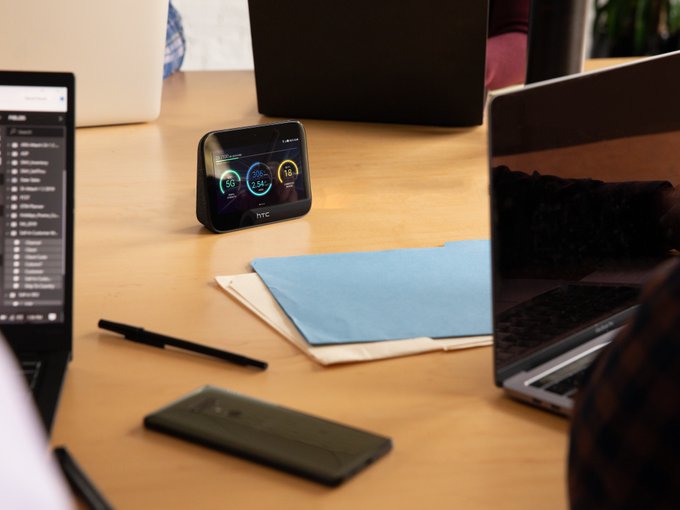 HTC says this Smart Hub will also allow users to stream content to its HTC Vive VR headsets without any wires beside casting 4K videos to large displays. It might even replace your tradition Wi-Fi routers, insists HTC’s CEO Cher Wang.

Besides its portable 5G router with a screen, HTC is also banking upon the successor to Exodus 1, which is claimed to have matched the company’s sales expectation. HTC is also planning to build its own cryptocurrency, but we’re not sure how that will work out in the global crash of cryptocurrencies. The upcoming Exodus smartphone will “will extend its blockchain apps to include other areas such as browsing, messaging, and social media,” HTC’s decentralized chief officer Phil Chen told DigiTimes. The smartphone will be launched later this year.

These plans may attract niche users but HTC may have to try harder to once again be dearie among the masses, and that requires more efforts than just proving its existence. This may include activities like pushing Android Pie update to other phones beside the flagship U12 and the U11 series.