We’re now just over two weeks away from Google’s rumored September 29 event during which the two new Nexus phones are supposed to become official. As such, leaks about both the LG Nexus 5X and the Huawei Nexus are starting to show up left and right.

Today the Huawei Nexus has been spotted in a benchmark’s database. The fact that someone has put a prototype through the paces of Geekbench thankfully reveals a few key specs. 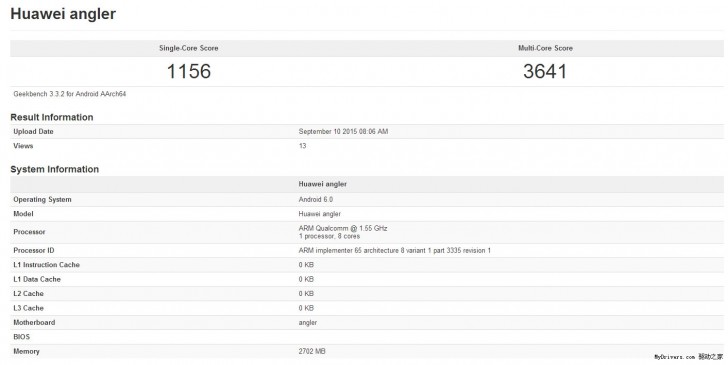 The Huawei Nexus sports the Qualcomm Snapdragon 810 chipset, as do a lot of other high-end handsets this year. Google’s next phablet is graced with 3GB of RAM, and it runs Android 6.0 Marshmallow as you’d expect. The new version of the mobile OS is going to debut alongside the two new Nexus smartphones.

Other specs haven’t surfaced this time around, but past rumors talked about the Huawei Nexus having either a 5.5″ or a 5.7″ screen, with either 1080p or QHD resolution. It should also get a USB Type-C port, and a fingerprint scanner.