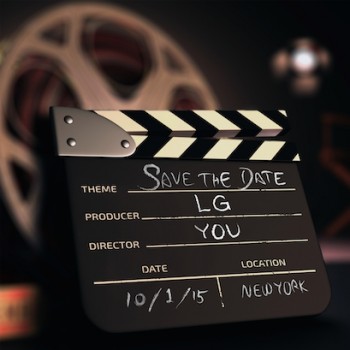 Microsoft isn’t the only company sending out media invites today. It’s been joined by LG, which is going to hold an event in New York City on October 1. As you can see from the invite itself (which is pictured to the left), there’s going to be some kind of movie theme to the gathering.

There are no additional clues, but for a few months now we’ve been waiting for LG’s second flagship smartphone of 2015 to become official. And this could just be when it’s going to see the light of day for the first time.

The handset in question may have already been spotted at TENAA, China’s equivalent of the FCC. If so, then it will be called V10, and it will be a slightly bigger sibling for the already announced G4.

The V10 has a 5.7-inch QHD touchscreen, a 16 MP rear camera with dual-LED flash and laser autofocus, a 5 MP selfie cam, 3GB of RAM, 64GB of expandable storage, and a fingerprint scanner built into the power key (which is located on the back of the phone in the trademark LG style).

The V10 is powered by the same chipset as the smaller G4 – Qualcomm’s Snapdragon 808. A unique feature of the upcoming device is a secondary ticker-style screen which is located directly above the main display.