In September, Lollipop was installed on 21% of the Android devices out there. This is the first time that Lollipop is seen crossing over the 20% threshold, after having moved past 10% back in June. As can be seen from the chart below, this calculation takes into account both Android 5.0 and Android 5.1 installs, since both of those versions are named Lollipop. 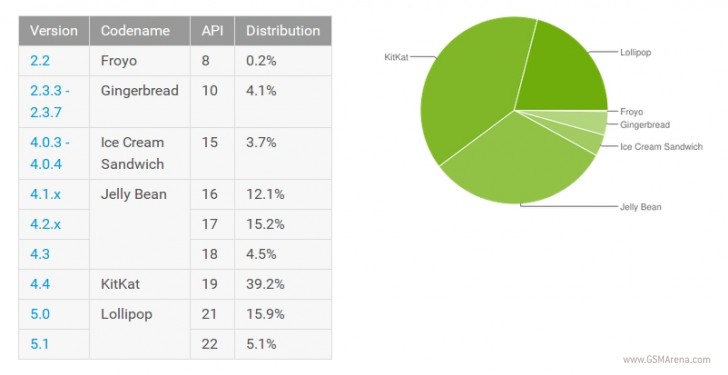 KitKat still leads though, with 39.2% of installs, followed by the three Android Jelly Bean iterations which collectively have 31.8% market share. After that there’s a big abyss in terms of numbers, with Gingerbread still somehow commanding 4.1% of the market and Ice Cream Sandwich being at 3.7%. Definitely last is Froyo with a 0.2% install base.

Keep in mind that no such official reporting is possible for even older versions, since the stats come from the new Google Play Store app which is only compatible with Android 2.2 or later. Also note that any versions with less than 0.1% distribution are not shown.

So it looks like Android device makers are releasing more and more products running Lollipop from day one, while at the same time updating their older wares to the new OS. However, there’s still a long way to go, and Android still is nowhere near iOS when it comes to how many devices in use run the latest iteration.