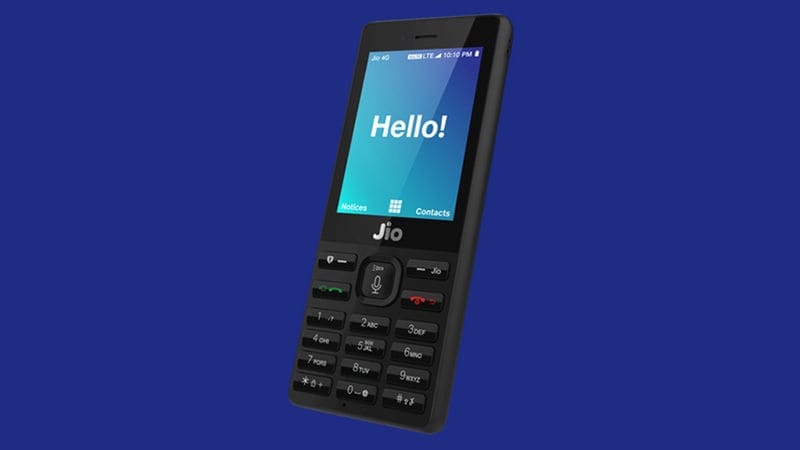 A new Rs. 99 Jio Phone recharge with 500MB data per day for 28 days has been launched too

The anticipated Jio Phone exchange offer is now available via all retail partners of the company. Announced at the 41st Reliance Industries Limited (RIL) Annual General Meeting (AGM) earlier this month, the new Jio Phone exchange offer (officially called the Monsoon Hungama offer) is designed to convince existing feature phone users to switch to a new Jio Phone at an effective price of Rs. 501. The Rs. 501 price also is claimed to be a 100 percent refundable security deposit that will be given back to customers at the end of three years. The offer went live yesterday at 5:01pm but was limited only to Jio Stores; starting today, however, customers can head to any Jio authorised retail store to exchange their old feature phone for the company’s 4G feature phone. The operator has also announced a new Rs. 99 recharge for users of the phone.

Under the new Monsoon Hungama Offer, customers can buy the Jio Phone at Rs. 501 in lieu of their existing feature phones. Jio says that it will accept old phones based on 2G/ 3G/ 4G (non-VoLTE) connectivity. Further, the old phones must be in working condition and charger. Customers will receive a new Jio SIM with the handset opting under the new offer, though they can opt for Mobile Number Portability (MNP) to retain their existing number.

As per the official criteria for exchange, the old phones must been in working condition without any damage/ missing parts or broken/ burnt parts. The phones also need to be exchanged along with their battery and charger. Furthermore, mobiles phones that were sold from January 1, 2015, onwards are eligible for exchange.

Jio is also offering a special Jio Phone recharge plan for customers opting the Monsoon Hungama offer. The new plan is giving unlimited voice and 500MB 4G data per day for six months on paying Rs. 594 at the time of activation of the new Jio Phone. The plan also brings 300 SMS messages for every 28 days. Additionally, users under the exchange offer will get a special exchange bonus of 6GB data voucher worth Rs. 101. This brings a total data of 90GB for a period of six months. Though it was not announced at the RIL AGM, it is mandatory for customers to pay the Rs. 594 sum if they avail the Monsoon Hungama offer. This Rs. 594 payment is essentially a one-time deposit for 6 recharges of the new Rs. 99 pack.

“We have reduced the effective entry cost of the Jio Phone from Rs. 1,500 to as low as Rs. 501,” RIL Chairman Mukesh Ambani had said at the AGM. “Our purpose is to accelerate the digital revolution in India with the extreme affordability of a Jio Phone, so that each and every Indian can access the Internet and enjoy the digital life. With the added functionalities, our wider network reach across India and strong retail presence across India, the goal that I have now set for our Jio team is to enable 100 million users on this platform in the shortest possible time.”

Unlike traditional feature phones, the KaiOS-based Jio Phone offers 4G VoLTE connectivity and is powered by a 1.2GHz dual-core processor, coupled with 512MB of RAM. It also sports a 2.4-inch display and has 4GB of internal storage along with microSD card support (up to 128GB), Wi-Fi, and a 2000mAh battery.

Jio Phone includes as many as 22 Indian languages and has Google Assistant support. The handset also offers an option to mirror content playing on the phone to an HDTV using a proprietary cable. Further, it comes preloaded with apps such as JioCinema, JioMusic, JioTV, and JioXpressNews. Reliance Jio in February also announced the arrival of the official Facebook app that can be installed via the Jio AppStore. Likewise, apps including WhatsApp and YouTube are also heading to the platform on August 15.