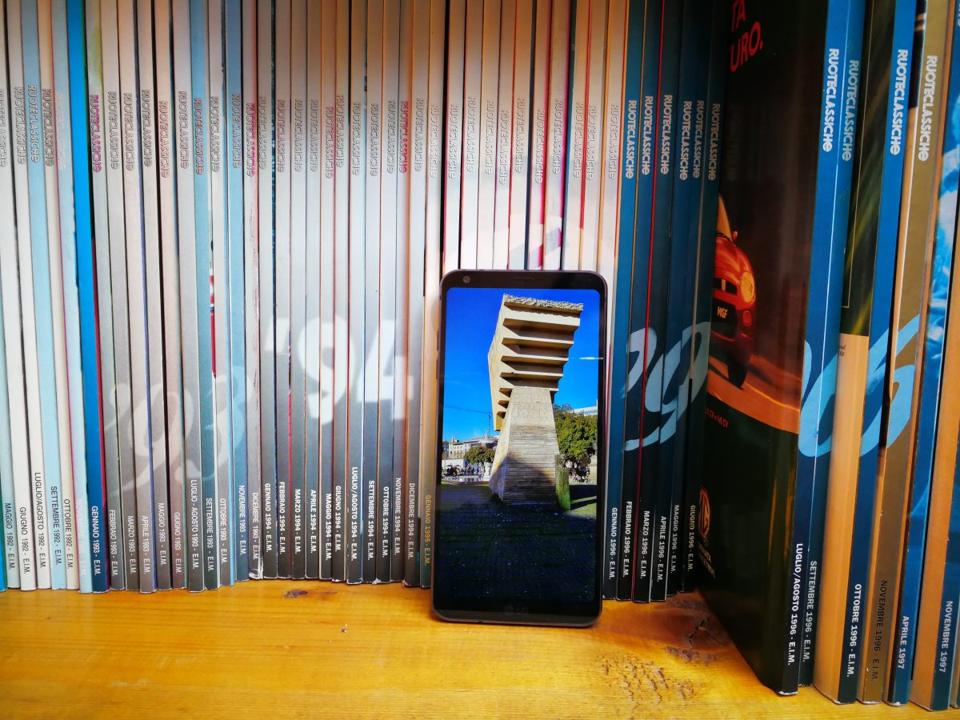 After the disappointing sales of the G5, South Korean tech giant LG is back with a radically redesigned G6.

In the history of consumer electronics, there’s been one constant: as technology advances, gadgets always get smaller and more compact. The last three years, when smartphones actually became increasingly bigger, was an anomaly. An odd blip on the radar. The biggest phonemakers in the world will spend 2017 fixing that problem. Later this year, both Samsung and Apple will release phones with drastically smaller bodies (while keeping the same screen size, or even expanding it) than last year’s models, and mainstream consumers will go gaga.

But this piece isn’t about them. It’s about LG, because once again, South Korea’s other chaebol (aka conglomerate) has beaten everybody to the punch with the new industry trend. The LG G6 is the most compact big screen phone ever made. It’s got a 5.7-inch display but the phone is significantly smaller than phones with 5.5-inch displays. Forget a minor bump in processing power or embellished tales about the importance of A.I. assistant in phones (this will be important a few years down the line, but as of right now the tech isn’t ready – Google Assistant is highly overrated, which I’ll get to later in this review), the big thing you’d want in smartphones this year is slimmer bezels, because that allows you to one-hand use the phone easier, without sacrificing screen real estate. The smartphone industry is finally going in the right direction again: phones are going to get smaller. 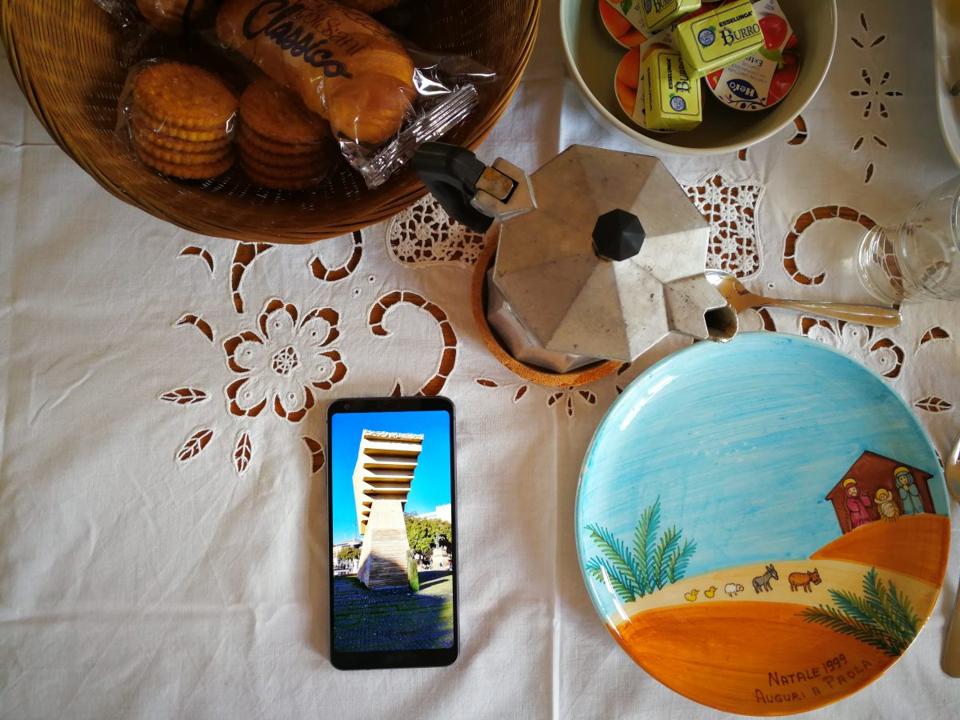 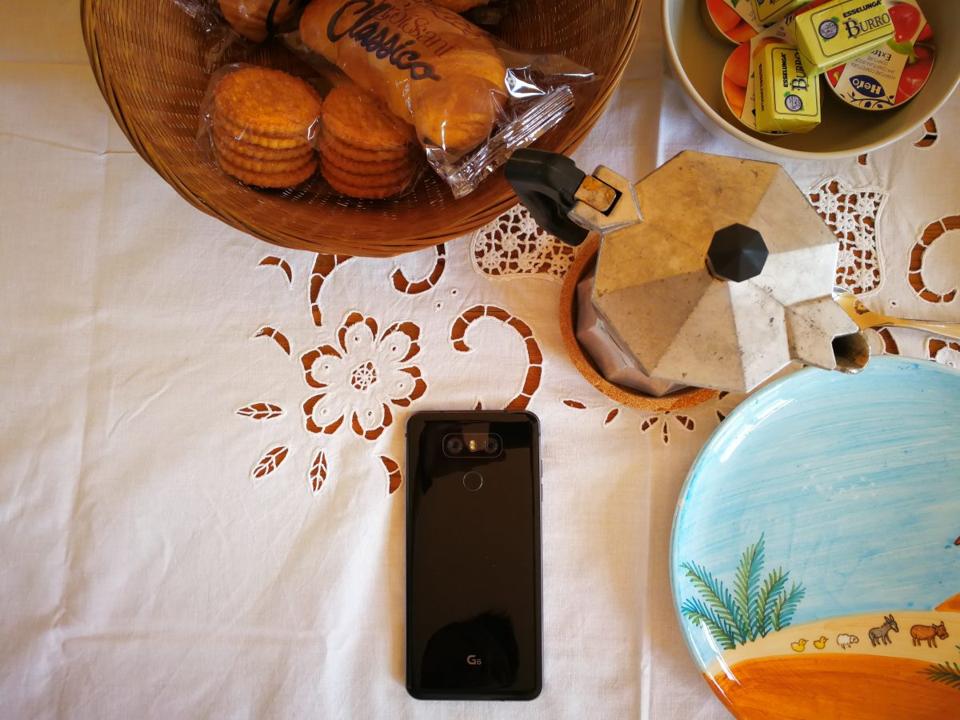 The back of the G6 is made of glass.

The 5.7-inch on the G6 is, just like previous LG phones, a QUAD HD (1440 x 2880) IPS LCD panel. That means colors are accurate and brightness gets very high, but the blacks are not as deep and the contrast not as punchy as AMOLED displays on Huawei’s Mate 9 Pro or Samsung’s Galaxy phones. If you’ve used previous LG flagships, you know what to expect here — this is still a strong, brilliant display. What is new about this display is it has an aspect ratio of 18:9, aka 2:1. This is slightly longer/wider (depending on if you’re in portrait or landscape mode) than almost all other smartphone displays, which are 16:9. That extra real estate means it’ll display more content, and when using Android Nougat’s multi-tasking split-screen mode, the two apps fit into a perfect square that makes them easier to use. 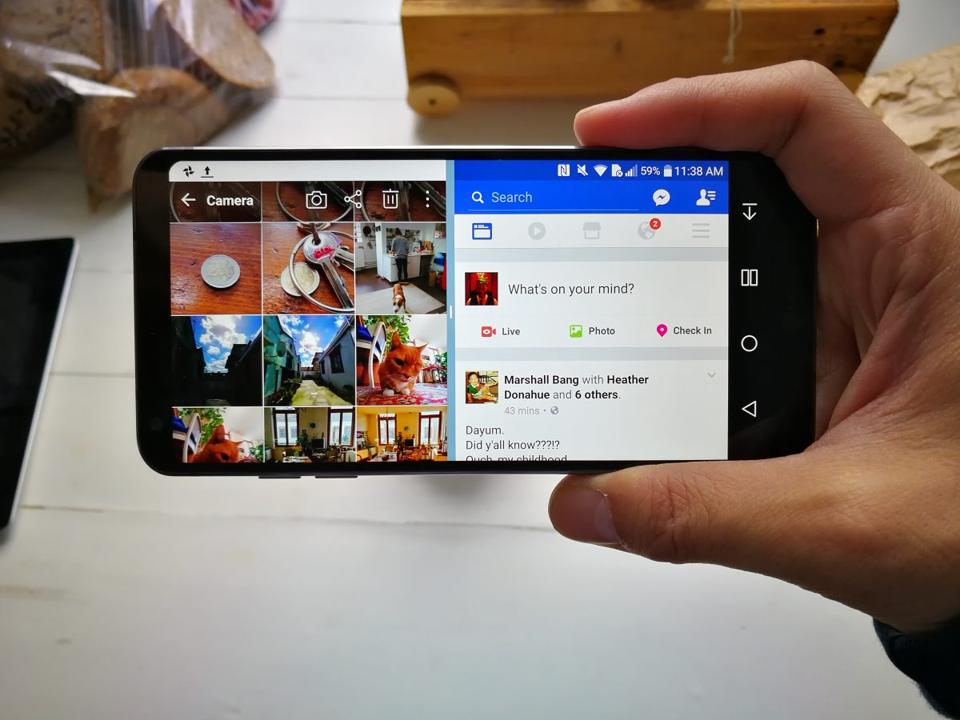 The G6 phone is great at multi-tasking.

LG says the 18:9 aspect ratio isn’t just about being able to read a couple extra lines of text in news articles, but that it was designed with a cinematic feel in mind. Though most videos are shot in 16:9 aspect ratio, there is an increasing amount of content out there, including some new Netflix shows, that are shot with an 18:9 aspect ratio. In fact, Damien Chazelle, a big film buff, shot La La Land in extra wide CinemaScope film, which makes that perhaps the most famous example of a “cinematic experience” that could be enjoyed fully on the G6 more than other phones. Is a wider display really that big of a deal on a mobile device? I’d argue no. But for what it’s worth, Samsung’s Galaxy S8 and S8+ are both likely going with that same aspect ratio. So if anything 18:9/2:1 is perhaps the future of Android displays. Just remember LG did it first.

Moving onto the device’s build. The G6 is surprisingly and weirdly straight and flat, especially for a phone in 2017, when everyone else, including Apple, is copying Samsung’s dual-curved display. (There’s actually a reason LG refrained from going that route, as I wrote here) The phone is made of glass and aluminum, of which personally I’m not a huge fan. I think the glass back thing that is most famously done on Samsung phones look great out of the box for about two seconds, and then it immediately attracts all types of oil and lint and fingerprints. The matte metal back of the LG V20 looks far more appealing to me than the G6’s glass back, but whatever — that’s just my opinion. 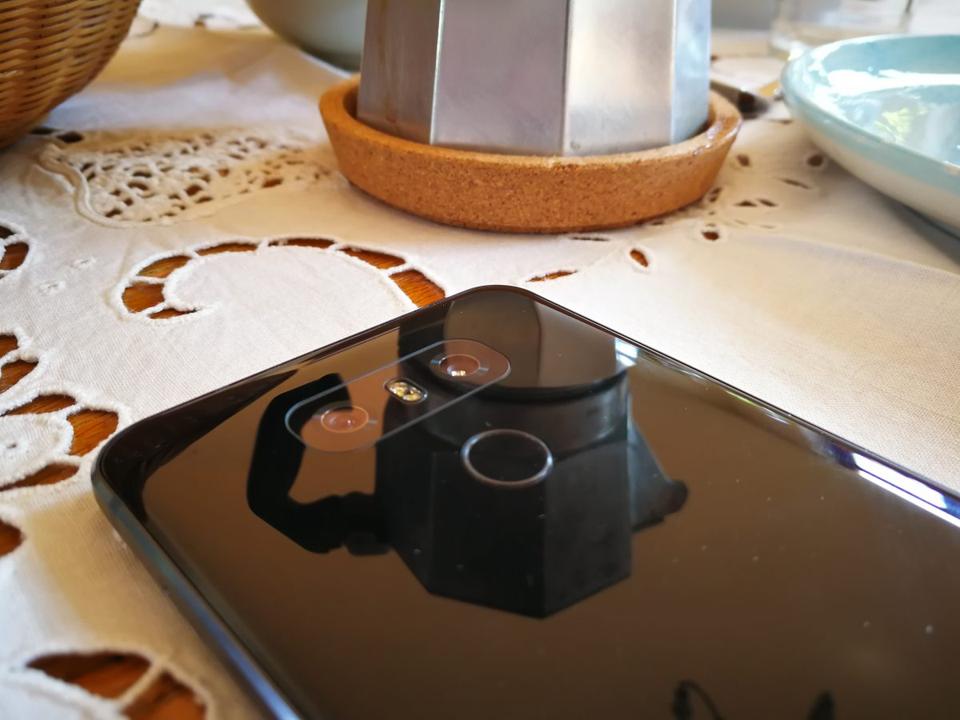 I had to wipe this phone down with a cloth before every shot because the shiny glossy back so easily looks like a greasy teenager’s face. 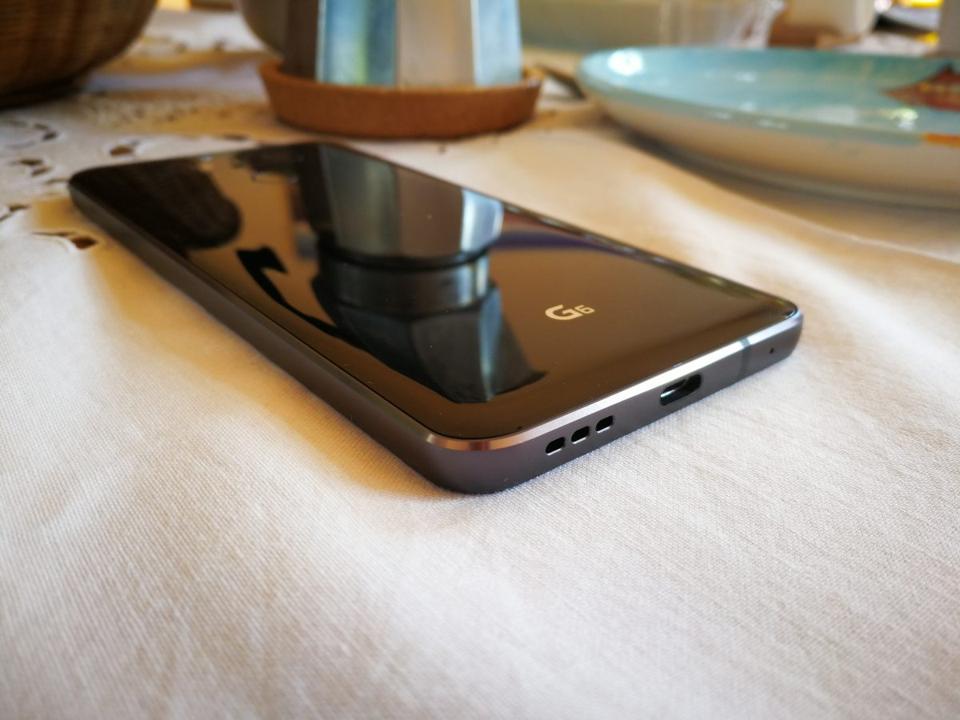 The phone is also surprisingly thicker than most other phones at 7.9 dimensions, but it’s still a very comfortable phone to hold.

The fingerprint sensor on the back activates upon touch (without the need to press down on the home button), but isn’t as accurate or fast as Huawei’s fingerprint reader. That’s not a major knock — Huawei’s fingerprint reader speed/accuracy is so far ahead of everyone else it’s jarring — the G6’s sensor is about on par with the ones found on the iPhone or Samsung Galaxy S7. Just don’t expect to get the phone to unlock on the first go if your finger is oily or slightly wet.

But, as I wrote last week, LG’s software has a great solution for times when you don’t want to or can’t use the fingerprint reader. The Knock Code is a genius software touch that lets me unlock the phone with relative ease by tapping a sequence of codes on the display. This is significantly faster than unlocking via PIN input, so the G6 is that one phone with a rear fingerprint reader that’s still usable while sitting flat on its back.

About that LG software … I’ve long been in the camp that thought LG’s UI is fine, and that the complaints from the tech geeks community is overblown. The skin here on top of Android 7.0 is clean and minimalistic, with my only complaint being that the app icons are a bit boring/vanilla compared to stock Android icons. Still, there are ways to fix that, which I did on my device. 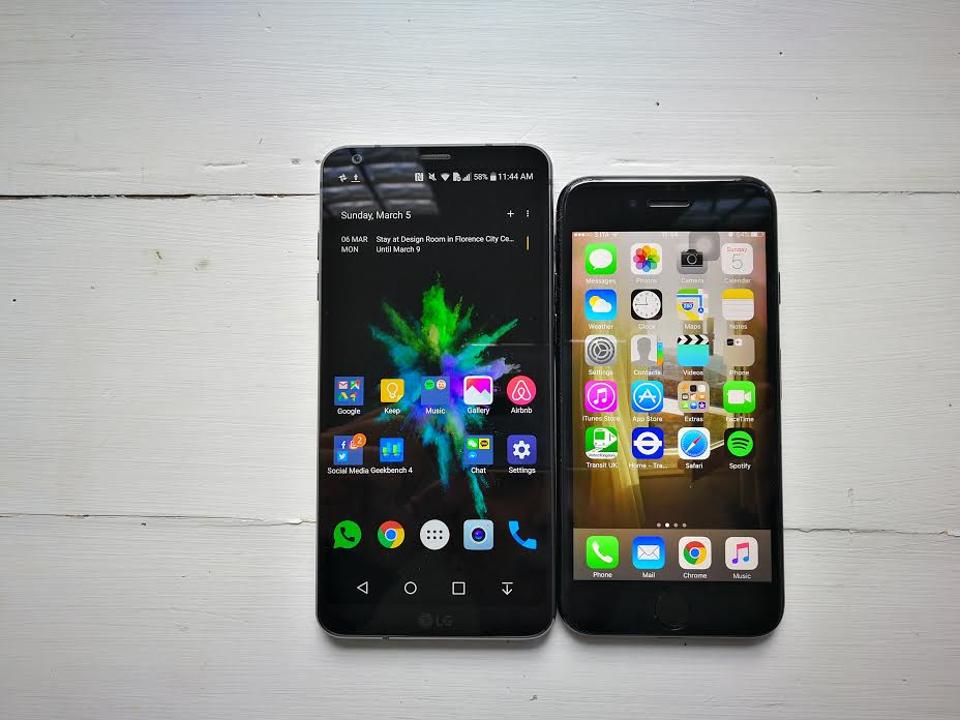 My G6 icons are more in line with stock Android icons than the square-ish vanilla LG icons. Also notice how the G6 is only a little bit bigger than the iPhone 7 despite having a much larger display. That’s the power of slim bezels. 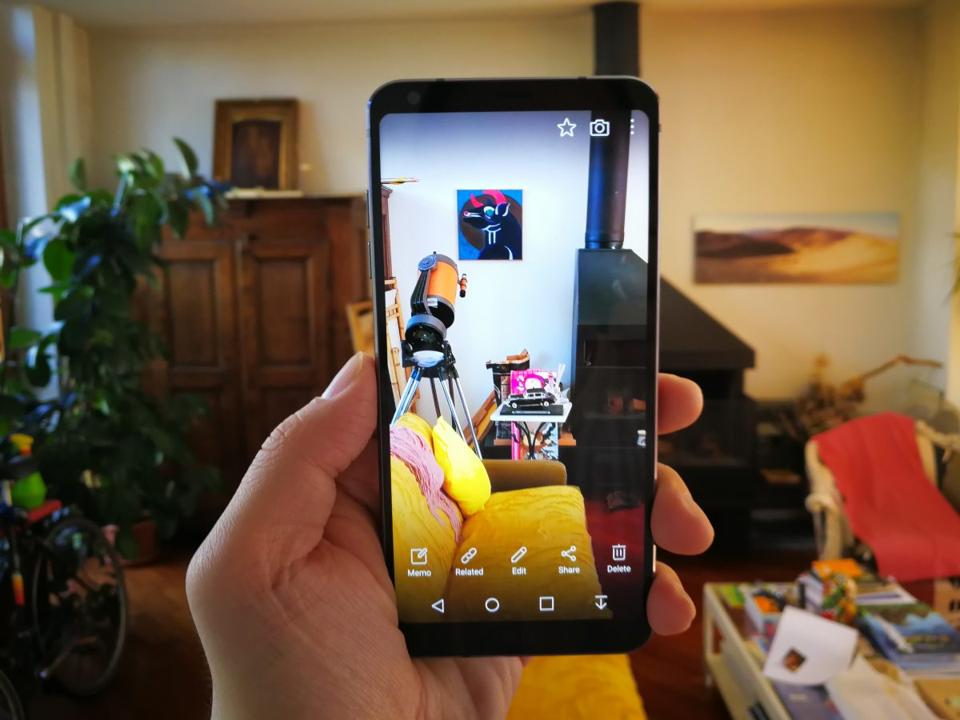 Back in January I broke the news that the G6 would run on Snapdragon 821 instead of the absolutely newest Snapdragon 835, and so far the G6 has been running super smooth despite the “older” chipset. LG reps have been saying publicly and privately that the “war for specs” is over, that they don’t stress too much about having the most megapixels or processing power. This is of course partly marketing speak — part of the reason they opted for the 821 was so they could get the G6 out before the Galaxy S8 — but there is truth to it. I don’t see how the Snapdragon 835 can improve much on the 821 in terms of basic day to day Facebooking or email writing. Plus Huawei’s Kirin 960 trumps everybody. I’ll bet money the Snapdragon 835 isn’t topping the P10 in raw benchmark scores.

With the G6, you get a feeling that LG wanted to clean its hands of the G5, because the former is so different that it’s almost like the antithesis of latter. But one thing that is returning from the G5 (and the V20) is the dual-camera set-up. Everyone is doing the two camera thing these days, but I like LG’s implementation the best. Huawei’s dual-Leica lens that can take bokeh shots is cool (Huawei did this before the iPhone, by the way), but the G6’s wide-angle lens is actually practical, because it allows you to capture images you normally couldn’t. Here’s a perfect example: after the Mobile World Congress I took a short trip to Rome. When I was checking out the Roman forum’s headless statues, I notice that most visitors had a hard time capturing the statues from a straight-on angle because there was a barrier preventing the photographer from stepping back too far. Have a look below. 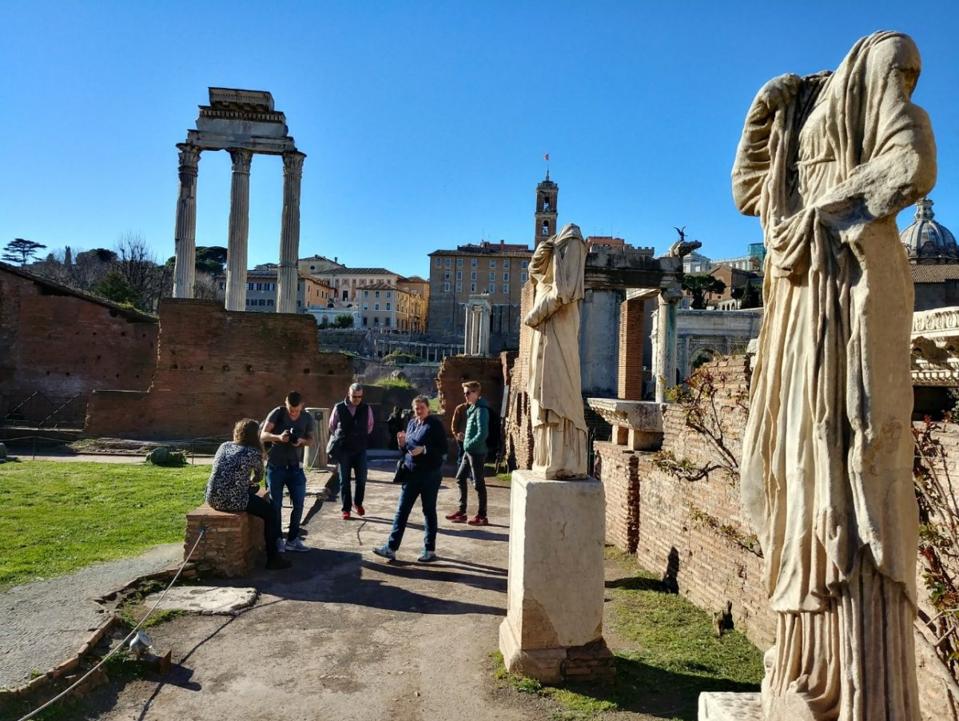 The barriers are maybe for to five feet from the statues.

Notice how there wasn’t a lot of room to back up to capture a full shot? But with the G6’s wide-angle lens, I was able to capture both statues head on (pun intended). 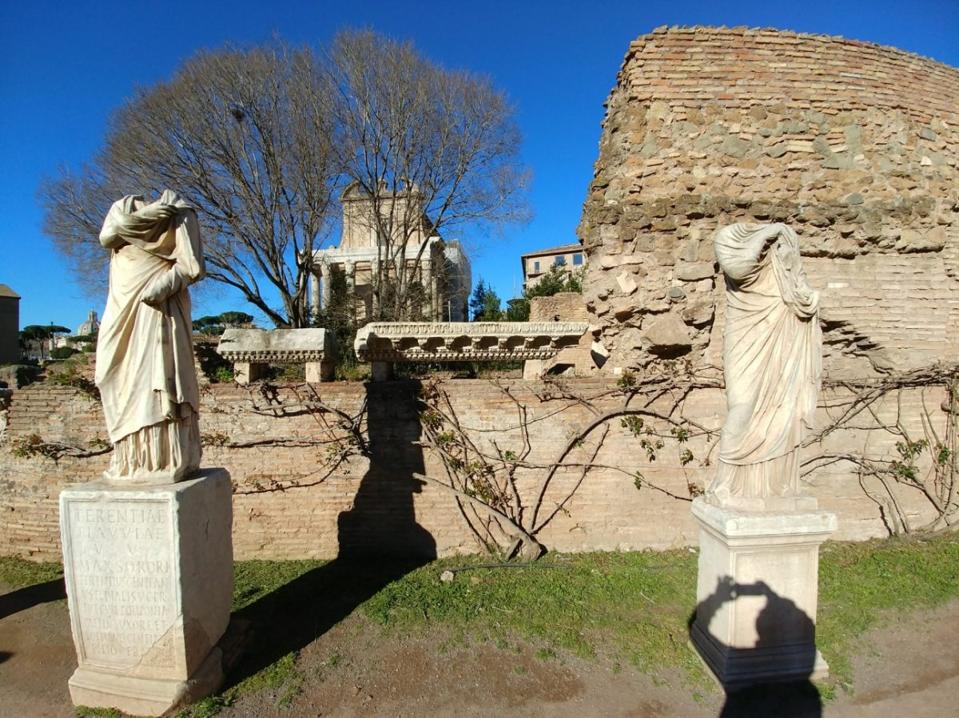 no Samsung Galaxy, Google Pixel or iPhone could have gotten this shot from this angle.

Here’s another example, I stitched two shots of my friend’s dinner table side by side, with the left being a normal shot and the right a wide-angle shot. With any other phone, you’d have to stand on a chair to get the entire table and the guests like that. 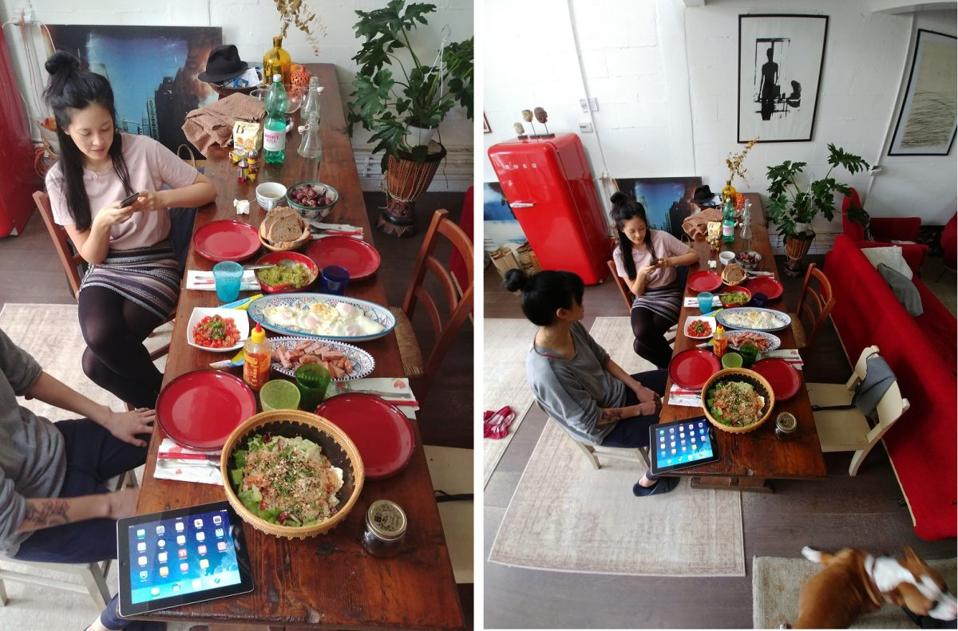