G will announce a brand new W series in India soon. We already know that the first phone in this new series will be called the LG W10. We also know that Amazon will sell the device after it goes official. The e-commerce platform has already revealed several key details about the LG W10 such as its triple camera setup and colour options. Now, we also know that LG plans to launch the W10 in India on Wednesday, June 26.

An image of what looks to be the official invite for the LG W series event has made its way online, revealing the launch date as June 26. The event is expected to begin at 11:30am in New Delhi. LG may live stream the launch event, but there is no word on that just yet. 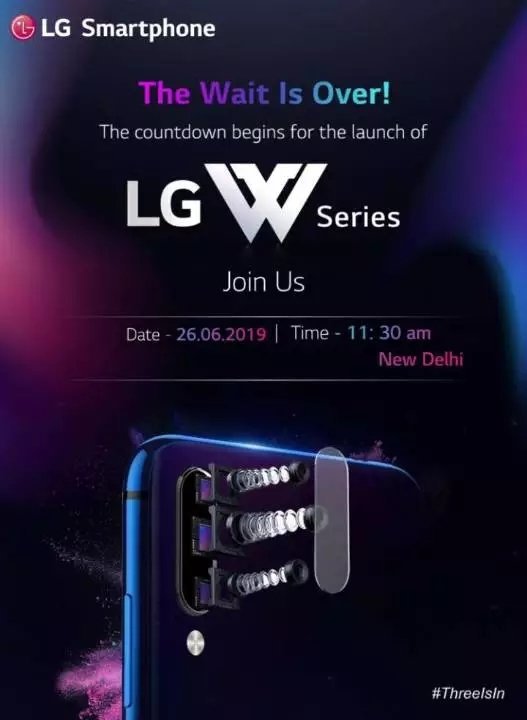 The LG W10, from what we know so far, will be an affordable smartphone that will pack a few notable features such as a triple camera setup that will include a wide-angle lens and possible dedicated night mode for low-light photography, unique gradient colours and the option to customise the display notch.

It is also rumoured that the LG W10 will pack a hefty 4,000mAh battery and will ship with Android 9 Pie. However, it is unclear whether it will be a stock Android interface or customised UI. The LG W10 will also come with a rear-mounted fingerprint sensor and will be offered in three colours – green, black and blue.

The LG W10 could either get a MediaTek Helio P60 chipset or a Snapdragon 439 SoC, as per past rumours. The handset is said to sport a 6.2-inch display and will be offered with 3GB of RAM and 32GB of internal storage as per its listing on the Android Enterprise website.