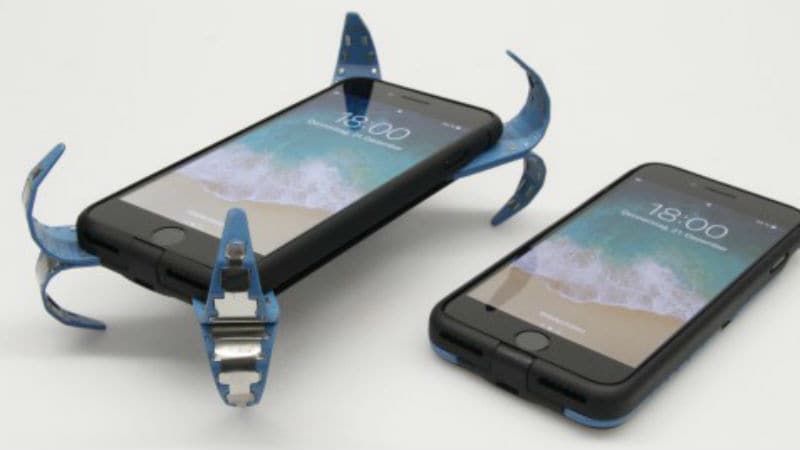 A German engineering student has invented a ‘mobile airbag’ case design that automatically deploys when a phone is dropped. We already have several case options in the market that can protect mobile devices from harm, such as cracks, scraps, water damage, and more. But usually, they come at a price apart from adding more bulk to the handsets that we have to carry around in our pockets. But a solution called AD (active damping) phone case, which has been registered for a patent, can detect when your handset is in a free fall. It then releases springs to make the phone bounces on the surface, damping the impact.

Philip Frenzel, a 25-year-old student from Aalen University in Germany, came up with the idea after breaking his smartphone by throwing his jacket over a bannister. The impact had caused the electronics inside the handset to break. Frenzel then started looking for developing a system to prevent dropped phones from breaking. He wanted a case that is smaller and advanced instead of being big and bulky. Following four years of tinkering, he invented a case that comes with sensors that can detect when the phone is in free-fall.

The sensors present in the ‘mobile airbag’ case prompts the release of four springs that cause the phone to bounce when it hits the ground, giving higher chances of avoiding scrapes and cracks. The dampers in the case are pushed into an ‘airbag’ position with metal springs, and they essentially help in absorbing the impact of the fall. Once deployed, the dampers can be pushed back into the case, meaning you can use it again.

Notably, the ‘mobile airbag’ or AD case is currently not available for purchase yet. However, Frenzel has acquired a patent and also received an award from the German Society of Mechatronics for his invention. There is a video posted by public broadcaster Sudwestrundfunk, in which Frenzel demonstrates how the invention works. As per the video, the AD Case adds minimal weight to a phone while offering significant protection against drop-shock. Frenzel is reportedly planning to commercialise the case starting with a Kickstarter crowdfunding campaign. Frenzel also won the Mechatronics Prize 2018 awarded by by German Society for Mechatronics for his work.