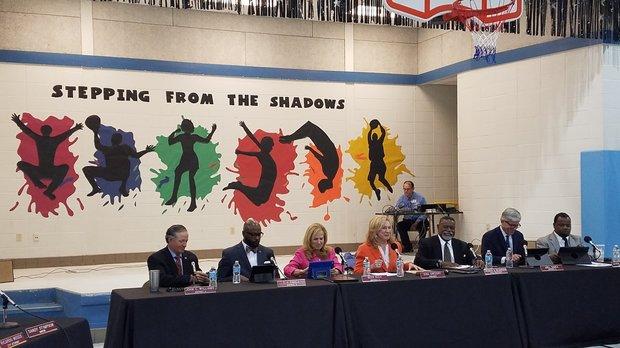 The moves came at a special Tuesday night council meeting, previously scheduled to take place at 6 p.m. at Holloway Elementary School in District 1 as part of the “Council in the Community” outreach campaign. An audience of about 90 people applauded Barber and Battiste after the motion passed, and the mood was generally congratulatory.

“We do want to do something special when you all are sworn in,” said Council President Gina Gregory. “Congratulations. We look forward to working with both of you in your new capacities.”

The personnel shift began to take shape late Friday, when Stimpson announced he’d accepted the resignation of Public Safety Director Richard Landolt and wanted to move quickly in appointing Barber to the position, with Battiste, a former Prichard police who has been with the Mobile department for several years, rising to the chief’s position. At Tuesday morning’s preliminary organizational session, the council signaled that it was willing to move forward with rapid approval.

If the shifts at the police department were smooth, Tuesday night’s meeting brought more indications that the Stimpson administration intends to push changes at the Mobile Fire Rescue Department.

In his remarks before the council, Stimpson repeated a position stated Monday in a letter to MFRD: The MFRD instituted some raises in the current fiscal year without implementing cuts needed to pay for them and consequently will finish the year in the red if changes aren’t made. The mayor also reiterated that it is now a priority to find a fire chief for the department, which has been led by an assistant chief serving as acting chief since Stimpson took office.

Waltman said his organization had a variety of concerns, including staffing, training and the scope of the MFRD mission. He addressed some of them in brief, but said they deserved full consideration and requested that the council’s public safety committee hold a public hearing at which all interested parties could be represented.

“We’re appreciative that Mayor Stimpson has recommitted to finding us a fire chief. That’s going to be very important in the future for us,” Waltman said. “We’re one of the largest divisions in the city of Mobile, and we need someone at the helm.” He went on to say that MFRD need to know the plan for the future of the department and the services it provides.

Councilwoman Bess Rich, the chair of the council’s Public Safety Committee, said she looked forward to scheduling a meeting on the topic.

Among other business on the evening’s agenda was formal approval of a $2.8 million contract to build a new fire station in Crichton. District 1 Councilman Fred Richardson said he was very pleased to see the station on the verge of becoming a reality, and that it would include a community meeting room as he’d requested.

Richardson said the station would be a boon to a wide swath of Midtown. “It’s going to be great for all the citizens in that general area in terms of response time,” he said.