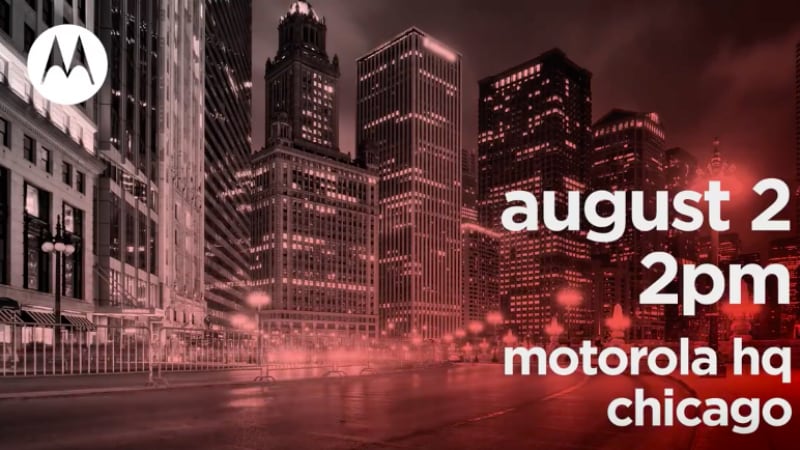 Motorola is set to host a launch event at its headquarters in Chicago, US today. At the event, the Lenovo-owned company is expected to launch three new smartphones – Moto Z3, Motorola One, and Motorola One Power. The event will be held at 2pm CDT (12:30am IST, August 3) on August 2. While Motorola has not mentioned the names of its upcoming smartphones, it had claimed that the products will bring about a “whole new way to connect, stream, download, video chat, and more.” While the Motorola One and Motorola One Power are expected to come with Android One branding, the Moto Z3 is touted to be the successor to the Moto Z2 Force.

Motorola had posted an 11-second video via its official YouTube page to inform about the launch event. The company is expected to make a “big announcement” on August 2. The video description reads as, “Say ‘hello’ to a whole new way to connect, stream, download, video chat, and more. Are you ready?” reads the video description. As of now, there is no clarity on whether Motorola will stream the event live. If it does, you should be able to catch all the updates without missing anything.

In terms of optics, the Motorola One bears a dual rear camera setup with a 16-megapixel primary and a 5-megapixel secondary sensor. On the front, there will be a 12-megapixel selfie camera. Connectivity options include 4G VoLTE, Bluetooth, and USB. Sensors on the smartphone include accelerometer, ambient light sensor, and proximity sensor. The phone measures 155.8×75.9×8.9mm and weighs 170 grams. The battery on the Motorola One is capped at 2,820mAh. As per the listing, the smartphone will arrive in Black, Gold, and Silver colour variants. Additionally, it appears to sport a glass back design compared to the metal back on the Motorola One Power.

The Motorola One Power also had made its way to certification portal TENAA in China. As per another listing on the Chinese certification website, the Motorola One Power will run Android 8.1 Oreo and sport a 6.18-inch full-HD+ display with a 1080×2246 pixels resolution and an 18.7:9 aspect ratio. The listing does not show a display notch on the smartphone, however previous renders have pointed towards the presence of one. The phone is powered by an octa-core SoC clocked at 1.8GHz, possibly the Qualcomm Snapdragon 636. This is coupled with 3GB/ 4GB/ 6GB of RAM and 32GB/ 64GB of onboard storage. Storage will be expandable via microSD card (up to 128GB).

In terms of optics, the TENAA listing reveals the presence of a dual camera setup at the back with a 16-megapixel primary sensor and a 5-megapixel secondary sensor. On the front, there might be an 8-megapixel or a 12-megapixel sensor for selfies and video calling. Connectivity options include 4G VoLTE, Bluetooth, and USB. As for sensors, it will come with accelerometer, ambient light sensor, and proximity sensor. As mentioned, there will be a 4,850mAh battery under the hood, with support for Moto’s TurboPower charging. Dimensions mentioned in the listing are 155.8×75.9×9.98mm and weight is 170 grams. Colour variants listed in the TENAA database are Black, Gold, Silver, and White.