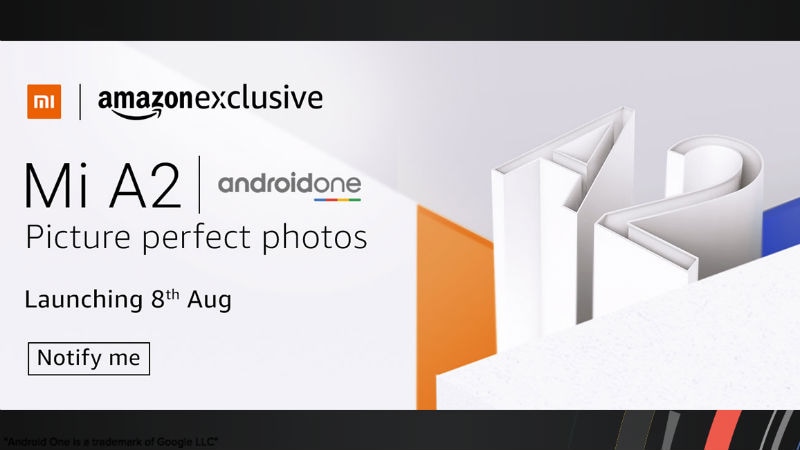 Xiaomi Mi A2, scheduled to launch in India on August 8, will be an Amazon-exclusive smartphone. The online marketplace is running a teaser page for the smartphone confirming the launch date. However, the Mi A2 price in India is not known yet. Launched in Spainearlier in July, the smartphone is a follow-up to last year’s Mi A1 and the rebranded version of the Mi 6X smartphone, featuring the stock Android 8.1 Oreo software and a promise of quick software updates. Previously, XiaomiIndia head Manu Kumar Jain had announced that the Mi A2 India launch event will be held on August 8, which is when the phone’s price will be revealed.

Amazon India has posted a dedicated page for the Xiaomi Mi A2 on its platform. The page also features a ‘Notify Me’ button, which provides an option to sign in using your name, email ID, and phone number to receive notifications on the arrival of the smartphone in India. The handset is also likely to be available via Xiaomi’s own Mi.com site. Meanwhile, the Amazon India’s page also highlights some of the key highlights of the Xiaomi Mi A2 including cameras, processor, and Android One certification.

To recall, Gadgets 360 had reported earlier that Xiaomi will not be launching the base 4GB RAM and 32GB storage variant of the Mi A2 in India. While Xiaomi is setting the 4GB RAM and 64GB storage variant as the base model for the Indian market, deliberations are still going on whether the 6GB RAM and 128GB option should be released as well in the country. The Indian market will also see an extra colour option – Rose Gold – launching, up from the three – Gold, Black, and Blue – announced at the global launch. We had also reported that the variants launched in India will support Quick Charge 4.

ALSO SEEXiaomi Mi A2 vs Mi A1: What’s New and Different

In terms of connectivity, the smartphone includes 4G LTE, Bluetooth v5.0, dual-band Wi-Fi 802.11ac, Miracast, an IR emitter, and USB Type-C. There is no 3.5mm headphone jack on the Xiaomi Mi A2. Sensors on the handset include accelerometer, ambient light sensor, gyroscope, and proximity sensor.