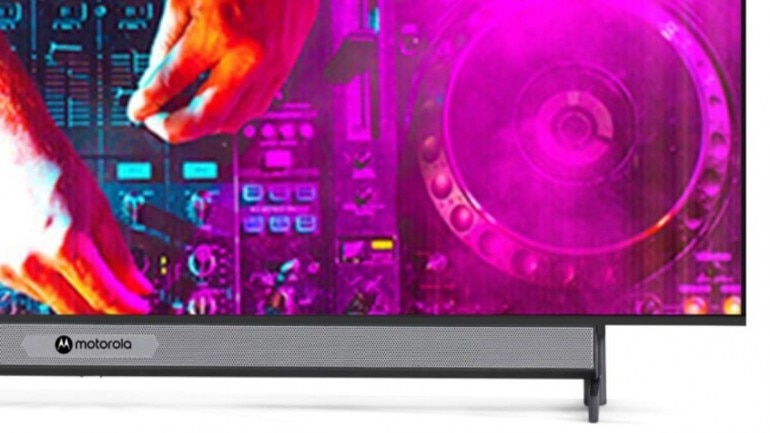 The smart TV space is the next big thing for smartphone brands and Motorola, like many of its rivals, is coming up with a new smart TV of its own. India Today Tech got information about it last week from a source, describing some of its features and specifications. And now, another leak posted by BGR India shows a sneak peek of the Motorola smart TV for the first time. And similar to its phones, Motorola is trying to do something different with its TV as well.

An official image of the Motorola smart TV has leaked online and as confirmed by our source last week, it flaunts a big integrated soundbar. The soundbar seems to be neatly integrated under the TV panel, flaunting the Motorola logo on it. Additionally, the image also shows the TV with narrow bezels all around. The Motorola TV will come with a black-and-gold colour scheme.

However, the leak from BGR India also suggests that the Motorola smart TV will come in many screen sizes. And in terms of pricing, it will be closer to Xiaomi Mi TV models in India. That means the Motorola smart TVs will be aimed at the affordable range for people who want a smarter TV experience.

Even in the audio category, the Motorola smart TV will come with better hardware. The integrated soundbar will be rated at 30W for output, which along with regular speakers should offer a better audio experience than its rivals. Additionally, for the display, Motorola will use a MEMC technology for the screen that should make for smoother visuals. However, the refresh rate of the screen will be limited to 60Hz as with most regular smart TVs.

However, there’s one major information that could affect your buying decision. The Motorola smart TV will be made and sold by Flipkart in India. Hence, it could be possible that Motorola has only lended its branding rights to Flipkart for the new smart TVs. Also, it’s not clear whether the Motorola smart TVs will rely on Google’s Android TV OS or use an Android-based platform with a custom interface. Nonetheless, the new Motorola smart TV range will be launched on September 16 in India.

September 16 will also see Motorola announce its upcoming Motorola Moto E6s for India. According to teasers on Flipkart, the Moto E6s is essentially a rebranded Motorola E6 Plus for the Indian market. The E6s is expected to priced under Rs 10,000 in India.