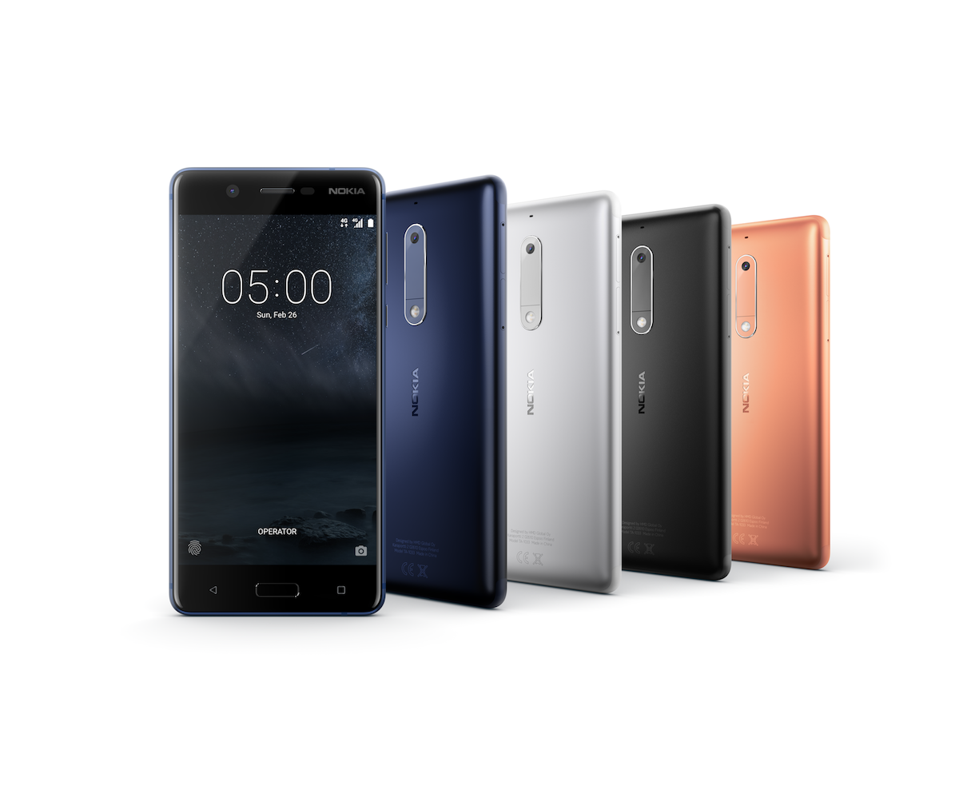 The range of Nokia 5 colors

Announced back in February, the first Android phones from Nokia are finally with us. Well, almost.

The entry-level model, the Nokia 3, is on sale now. The next step-up is the Nokia 5, which goes on sale in some countries, including the UK, on August 16. The Nokia 6 is the highest-specced of the lot and is on sale this week.

All are keenly priced, and none is the flagship that is coming. That’s almost certainly to be revealed on August 16 [LINK] though there are some leaks already [LINK].

Of these first models the Nokia 5, I’d say, is the most intriguing. I’ve been testing it for almost a month now and overall, I’m impressed.

Build quality is excellent. Each Nokia 5 is hewn from a single block of aluminum, a process which takes longer but achieves a better end result. The unibody chassis is solid and effective. It’s a highly tactile handset, thanks to the gently curved edges and pillow display. It’s easy, and satisfying, to roll it in your hand like a worry stone. 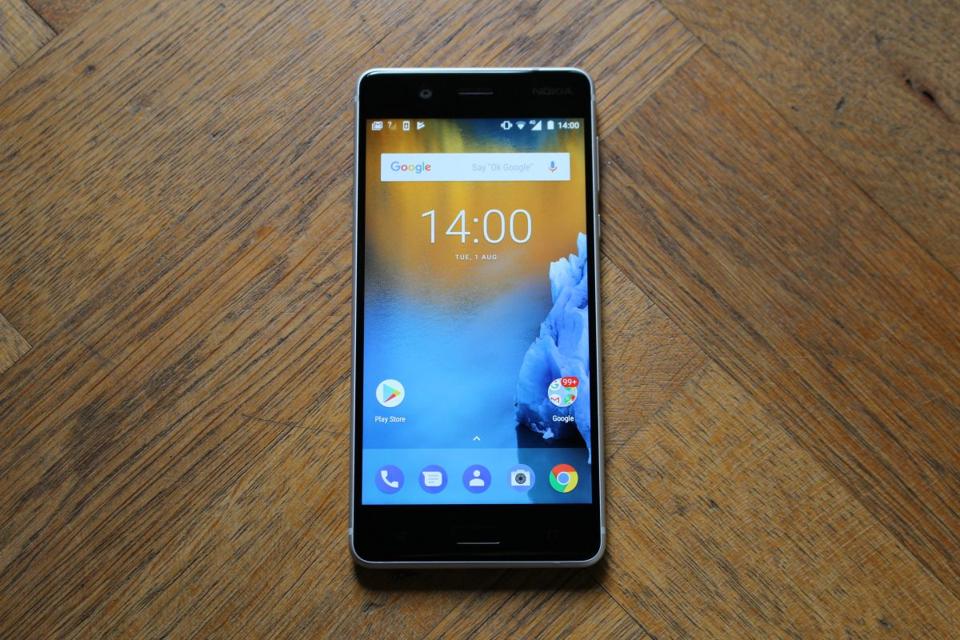 Nokia 5 in silver hue, with bright screen and big bezels.

Design has always been one of Nokia’s strongest cards and it’s clear that HMD Global, the company now responsible for the phones, are taking this heritage seriously.

It’s common for metal-jacketed phones to have an external antenna band. This has been just too visible on some phones – like the Apple iPhone 6s, for instance.

Here, it’s very discreet, running round the top edge, hard to see from front or back views. It’s arguably one of the most attractive implementations of this utilitarian feature. It’s in a contrasting colour to the main aluminum housing – white against the silver of my review sample. The camera panel on the rear of the phone is decked out in the same gloss white finish.

The phone is also available in blue, matte black and a cute shade which Nokia calls copper.

The design of the phone is appealing: it’s understated and chic. The camera section on the back echoes the simplicity favored on classic Nokia handsets.

This is a mid-range phone. Even so, there’s a fingerprint sensor in the home button on the display’s front – many phones at this price don’t manage to include one. It’s well-placed and reasonably responsive.

But while flagship phones now have slim bezels on every side of the display, here there are wide black borders at the top and bottom of the phone’s face. They aren’t surprising at this price, and it’s not like they look bad. But the trend is to thin bezels on even lower-priced phones now, so Nokia may come to wish they’d slimmed the frame down. Nothing looks more outmoded than a feature that’s been deleted elsewhere.

The 5.2-inch display has a resolution of 282 pixels per inch (1280 x 720) but actually looks better than that statistic suggests. It’s certainly acceptable in a phone at this price.

Nokia has supplied the 5 with a plain version of Android which means there’s little of the bloatware that is so annoying in some phones. And it has the advantage that when the Android OS is updated, it should be able to implement changes quickly. It’s already on the latest version of Nougat, 7.1.1.

These days a mobile phone’s camera is a crucial element, and Nokia has recently announced it’s continuing the very successful alliance it used to have with lens masters Zeiss. The new collaboration will see lenses and camera software provided by Zeiss, but this phone arrives before the reunion of the two titans. 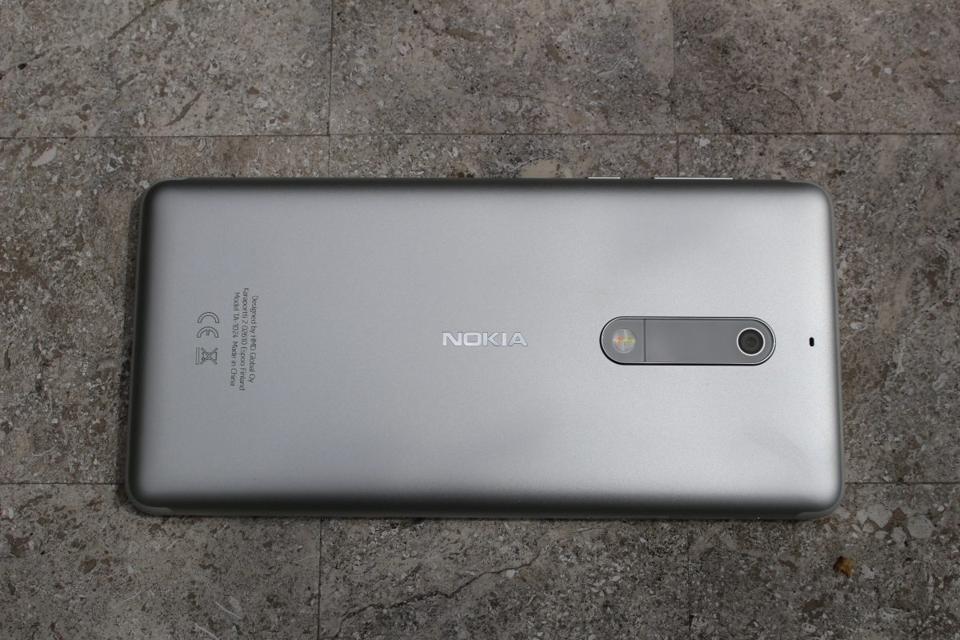 The 13-megapixel rear snapper here is simple to use, even featuring a quick launch mechanism when you double-press the power button. Controls are straightforward, elementary, but include details like a level so you know your horizon is straight.

Shutter lag can be an issue on cheaper cameraphones but here it was pretty nippy, especially when there was plenty of light. I found the camera responsive and effective, delivering strong results with decent contrast and bright colours.

Lower light, where smartphone cameras traditionally struggle, was more of a challenge. It has a twin-colour flash, also a bonus at this price point. Even so, this doesn’t match the excellence of high-end cameraphones like the Samsung Galaxy S8 and iPhone 7 Plus.

This is far from the fastest phone I’ve used, and there were occasions when it kept me waiting, but for most of the time it was reliable and quick enough.

And the battery lasted well, more than some high-end smartphones and easily a full day.

Built-in memory is not huge, just 16GB, but at least there’s a microSD card slot which will let you add up to another 256GB of storage, should you wish.

The Nokia 5 is a smasher with deeply attractive design, great build quality and decent performance. Sure, it’s not a flagship phone with dual cameras, super-fast processor and so on.

But the overwhelming feeling I’m left with is that it does better than the price point suggests.

It’s a great first step for the new Nokia and augurs well for the Nokia 6 that’s on its way now and the higher-end phones waiting in the wings for HMD.