HMD Global, which owns the Nokia brand, has finally put up the Nokia 8 Sirocco and the Nokia 7 Plus up for sale in India. The phones, which went on pre-order earlier this month, were unveiled for the first time back in February at MWC 2018. 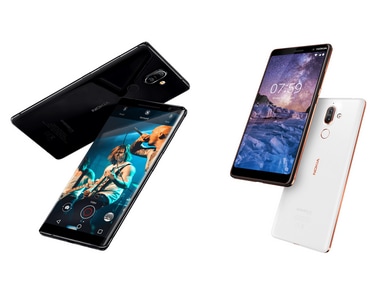 The Nokia 8 Sirocco and the Nokia 7 Plus.

The Nokia 7 Plus has an original price tag of Rs 28,028 but it is being offered at a 7 percent discount on Amazon. Airtel prepaid customers can avail a cashback of Rs 2,000, while there is a 10 percent cash back on the use of an ICICI credit/debit card.

The Nokia 8 Sirocco features a 5.5-inch QHD P-OLED unit that curves at the sides and has Corning’s Gorilla Glass 5 protection. Under the hood, we find that the device has a Qualcomm Snapdragon 835 chipset paired with 6 GB RAM and 128 GB of internal storage.

In the camera department, the phone has a dual camera on the back. This camera includes a 12 MP sensor with an f/1.7 aperture and a 13 MP camera sensor with a telephoto lens and f/2.6 aperture. Powering the device is a 3,260 mAh battery that also supports Quick Charge.