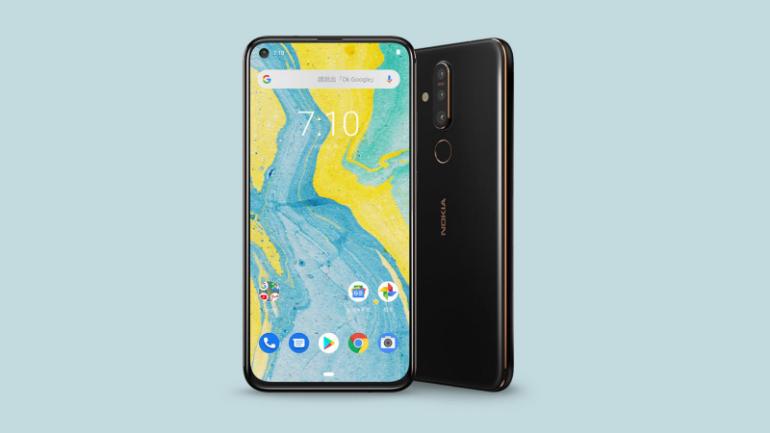 HMD Global has announced the Nokia X71, the first Nokia phone to sport a punch-hole display. The Nokia X71 has been launched in Taiwan and it touts a premium glass and metal design along with high-quality mid-range specifications that includes a 48MP triple camera system and a Snapdragon 660 chipset, among other things.

It is still unclear whether the Nokia X71 will be called the Nokia 6.2 or Nokia 8.1 Plus. Given the pricing and hardware, the Nokia X71 falls right along or just below the Nokia 8.1 (Review). HMD Global hasn’t announced its global availability just yet, but we do expect the phone to launch in other markets including India soon enough. Here’s a quick look at the specifications, features and price of the new Nokia X71.

Display: The Nokia X71 sports a 6.39-inch PureDisplay screen with a FHD+ resolution and 19.3:9 aspect ratio.

Processor: It is powered by an octa-core Snapdragon 660 chipset.

Storage: It comes with 128GB of internal storage with support for expandability up to 256GB.

Front: The phone gets a 16MP selfie camera housed in the display hole.

— In terms of design, the biggest new feature is the punch-hole display. This is the first Nokia smartphone to sport a hole cutout in the display to house the selfie camera. This type of display has been seen on phones like the Honor View 20 and Samsung Galaxy S10 in the recent past. The circular cutout allows for a notch-less display and larger screen real estate. The Nokia X71 offers a tall 6.39-inch FHD+ display with a 93 per cent screen-to-body ratio.

— In addition to the edge-to-edge display, the Nokia X71 gets a premium metal and glass design. It comes with a 2.5D curved glass on the front and back and a solid metal frame. The phone is offered in a single Black colour option with copper accents around the frame, fingerprint sensor and camera module.

— Notably, the Nokia X71 also gets the LED power button breathing light that HMD introduced earlier this year with the Nokia 3.2 and Nokia 4.2 phones. The power button will glow white when you receive a missed call or an unread message.

— The Nokia X71 is also the first Nokia phone to sport a triple camera setup with a 48MP primary camera. HMD hasn’t explicitly mentioned whether it’s using Sony’s IMX586 sensor or a Samsung GM1 sensor. Nevertheless, you can expect crisp and detailed shots through the primary camera that should also do well in low-light thanks to a large 1.6-micron pixel size and f/1.8 aperture. The triple camera setup also includes a 5MP f/2.4 secondary depth sensor, and an 8MP ultra wide-angle sensor.

— The Nokia X71 gets a tried and trusted Snapdragon 660 AIE octa-core chipset based on a 14nm process. This is paired with 6GB of RAM and 128GB of internal storage. The phone also ships with Android 9 Pie, but lacks the Android One branding in Taiwan. If the phone launches internationally, you can expect to see the Android One branding with stock Android Pie out of the box.

The Nokia X71 has been launched with a price tag of NTD 11,990 in Taiwan, which roughly translates to Rs 26,900. This is similar to the price of the Nokia 8.1 in India. The Nokia X71 is currently up for registrations and is expected to go on sale starting April 10. As mentioned earlier, there is still no word on what the phone will be called internationally, and when it will land in other markets including India.