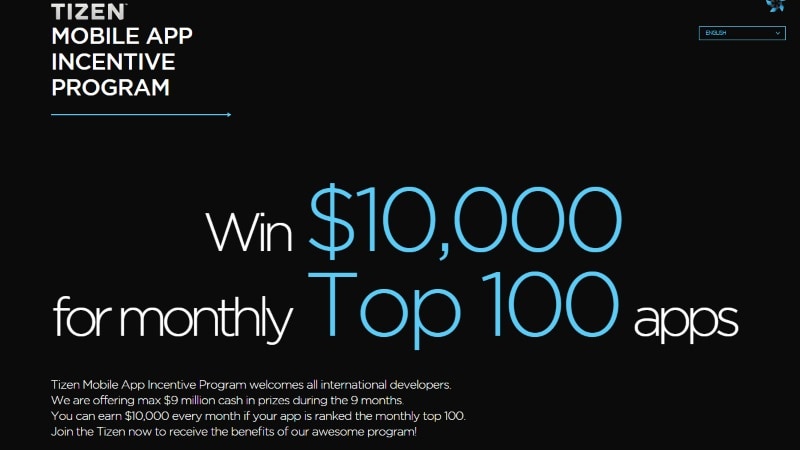 If an operating system is competing against well-established platforms like Android and iOS, there are several factors that can prove to be a challenge. However, the biggest problem is likely to be the number of apps available on the platform. While competing in numbers is rather pointless, if an app you regularly use is missing – that’s a deal-breaker. It seems like Samsung now wants to give its Tizen OS a fighting chance as the company has launched an incentive programme to lure developers to its mobile operating system.

Samsung has announced its ‘First Global Tizen Mobile App Incentive Program’ to give a boost to its mobile operating system that was launched back in 2012. As a part of this programme, the company will be handing out a sum of $10,000 (Rs. 6.77 lakhs) every month to each developer whose app is pre-registered with the incentive program and features among the top 100 apps downloaded from the Tizen Store for that particular month. If any two apps have the same download numbers, the first to register will win the prize.

This incentive programme will run in a 9-month period from February through October 2017. Samsung says it is offering a maximum of $9 million cash in prizes during the 9 month period – translating to a $1 million each month. The company has arrived upon this figure by multiplying $10,000 with 100 (top apps) with 9 (months), though it does seem improbable that all 100 apps would win each month, especially since Samsung hasn’t yet clarified if the same app can win more than once in the 9-month period. The company says it will release detailed rules for the incentive programme in January.The company has clarified that apart from new apps, those apps that are already available in the Tizen Store can also participate in the incentive programme to win the cash prize. As per company’s directions, the target devices for developers should be Samsung Z1, Samsung Z2, Samsung Z3 and further smart phones that will launch in the 2017.

“We’re excited to launch this new incentive program to help develop and bring the best of mobile apps to the Tizen community as well as provide customers with a better mobile experience,” Woncheol Chai, vice president of global product management, mobile communications business, Samsung Electronics, was quoted as saying in company’s news post.

In order to know more details about the incentive programme, you can head to Tizen store’s website.

If we consider the number of apps on other platforms, Android and iOS have developed seemingly insurmountable lead over other operating systems. However, this incentive programme by Samsung might give the developers an extra push to bring their apps to its mobile operating system.