Samsung beat analysts’ expectations and its shares surged 8.7%, the biggest jump since 2009. The full results are not available yet, but the operating income rose to $6.3 billion – a massive 79.8% jump compared to the year ago quarter.

Semiconductors and displays are behind Samsung upswing. External Super AMOLED consumers like Huawei (for the new Nexus 6P) are buying more, helping the display unit (over 30% of display units may head to Chinese makers).

Samsung’s semiconductor business is enjoying Apple’s success (it supplies components for iDevices) and is expected to keep its top position among semiconductor makers, five quarters in a row.

There are no hard numbers on the mobile division, but analysts’ expectations are for a 24% rise year on year (around $1.9 billion). This will be the first year-on-year rise in sever quarters for the division, which went through a rough patch. 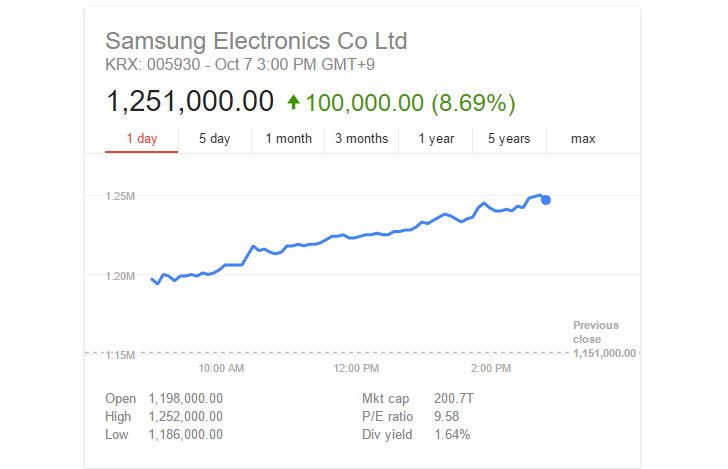 Still, Samsung Galaxy phones are feeling the heat from iPhones on the high end and Chinese and Indian devices on the low end. The sub-$200 devices are largely responsible for the sales increase, while Galaxy S6 shipments are dropping “significantly,” says an IBK Securities analyst. He calculates the Average Selling Price in September dropped 14%.