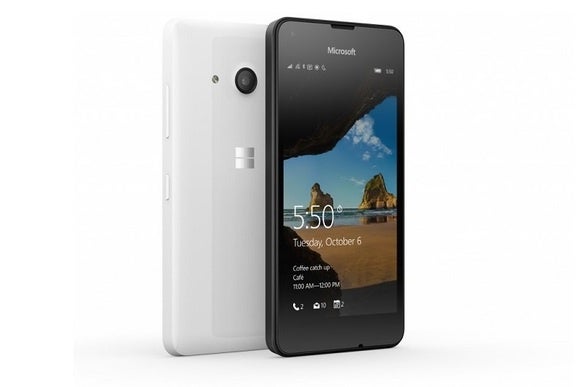 Microsoft says it will launch the Lumia 550 in “select markets” today for $139 without a contract. The phone is unlocked, and supports 4G LTE data speeds, though Microsoft hasn’t specified on which networks it will operate. The buy link has also yet to go live onMicrosoft’s website as of this writing.

For tech specs, the Lumia 550 has a 4.7-inch 720 display, a 1.1 GHz quad-core Snapdragon processor, 1GB of RAM, 8GB of storage, a 5-megapixel rear camera and a 2-megapixel front camera. Microsoft promises up to 10 hours of Wi-Fi browsing or 14 hours of 3G talk time from the 2,100 mAh battery, which is removable. The spec sheet also mentions an exchangeable back cover, though Microsoft has only announced black and white options.

Keep in mind that as a low-end device, the Lumia 550 doesn’t support Continuum, which lets certain Windows 10 Mobile phones plug into a docking station for use with a mouse, keyboard, and desktop monitor. It also lacks the infrared sensor necessary for Windows Hello facial recognition.

On the higher end, Microsoft is selling the Lumia 950 through AT&T for $600 off-contract, and will soon sell the unlocked Lumia 950 XL for $650, with a free Display Dock for a limited time. So far, Acer is the only other company to have announced a Windows 10 mobile phone, though Alcatel OneTouch will likely have its own cheap handset by year-end.

The impact on you at home: Why bother with the Lumia 550? Microsoft says it’s a solid way to experience the company’s own services, such as Cortana, OneDrive, and Office. These services are also available on iOS and Android, however, so it’s mostly just a cheap phone that will probably run smoother than your average budget Android handset.