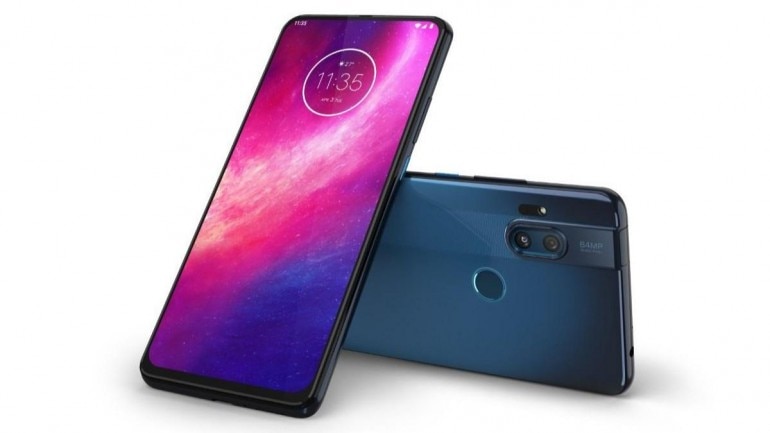 Motorola has had an exciting run in 2019, launching unique smartphones with features that make its phones stand out from the rest of the crowd. While we are still getting over the hype fever of the new Moto Razr, Motorola is coming up with another affordable phone in some global markets. And before you ask, it’s the Moto One Hyper that leaked a long ago and just before its official launch, the official press renders of the phone have leaked online.

Sourced from Slashleaks, the Motorola One Hyper is the first Moto phone with a pop-up selfie camera. Yes, when the whole industry is ditching the mechanical pop-up cameras in favour of hole-punch cutouts, Motorola is coming up with a pop-up camera on its latest Android One phone. It’s similar to the first set of the photos we saw earlier in the year. And it comes in two colours blue and brown, similar to the colour schemes of the Moto One Vision.

At the back, there are a lot of aggressive design elements, with a camera hump design inspired by some Vivo phones in 2019. There’s a dual-camera setup at the back and according to the previous rumours, it could use a 64-megapixel sensor along with an 18-megapixel secondary camera of some sort. The capacitive fingerprint stays at the back but it’s surrounded by an LED notification ring. There’s also a unique gradient pattern that looks quite good. However, the One Hyper has a notch-less display with slim bezels and a slightly thick chin. The no notch design is helped by the pop-up selfie camera but Motorola could be using an LCD display possibly a Full HD+ resolution. There’s also a cloured power button on the side frame.

Similar to all affordable phones, the One Hyper features a 3.5mm headphone jack as well as a USB-C port at the bottom. The camera hump is big which suggests Motorola could offer some serious camera capabilities with the One Hyper.

It’s too early to say whether Motorola is considering the One Hyper for India or not. Motorola never brought the One Zoom to India and the One Hyper shares similar specifications. Hence, chances of Motorola bringing this phone to India are slim.

However, what’s coming for sure is the Motorola Razr Motorola’s ultra-cool flagship phone with a folding display and a flip phone form factor.