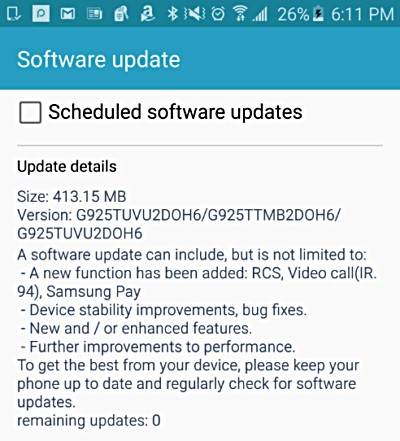 When T-Mobile launched its native video calling feature last week, it was only available on the Samsung Galaxy S6 edge+ and Galaxy Note5 smartphones, although the carrier said that the Galaxy S6 and Galaxy S6 edge will get it the following week.

As promised, the feature has started rolling out to the latter two through a software update.

Sized at around 413 MB, the update also brings along the carrier’s Advanced Messaging feature that allows users to easily share high-res photos and videos up to 10 MB, have near real-time chat, and more.

Finally, it also brings Samsung Pay to the devices. If you aren’t in the know, Samsung Pay is the South Korean company’s answer to Apple Pay and Android Pay. The mobile payment service is already live in the company’s home country, and will officially launch in the US on September 28