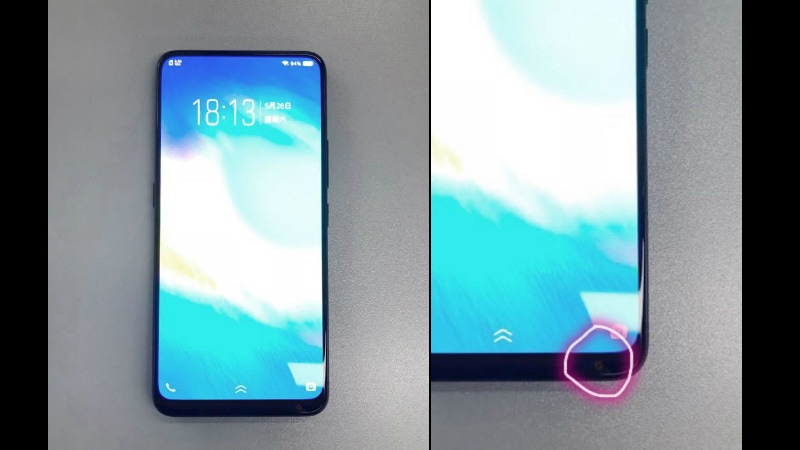 The Vivo Apex made its initial appearance as a concept phone at MWC 2018 and its formal announcement was made in March this year. The key highlights of the smartphone include a 91 percent screen-to-body ratio, half-screen fingerprinting scanning tech, and an elevating (or pop-up) selfie camera. Now, new reports claim that the commercial name for this truly bezel-less device is expected to be Nex, and it is set to launch on June 12 in China. Furthermore, a new leak claims that the Vivo Nex may come in two variants – one with the pop-up camera and one without.

A new poster of the upcoming flagship in a China offline store has the name Vivo Nex plastered next to a smartphone that looks exactly like the Vivo Apex that we’ve been talking a lot about recently. Ihei5 reports that the slogan on the poster reads that the Vivo Nex will be “the flagship of AI wisdom” hinting that AI camera capabilities may be embedded. This poster reinforces the faith in the name – Vivo Nex – the commercial name for the once concept phone Apex.

Furthermore, the report says that Vivo Nex will launch in two variants. The more premium variant will have the pop-up front camera on top, will be powered by the latest Snapdragon 845 processor paired with 8GB RAM, and house of 256GB inbuilt storage. This variant is said to be priced at CNY 4,999 (roughly Rs. 52,600).

The other variant will be powered by the Snapdragon 660 processor paired with 6GB RAM, 128GB internal storage, and have no pop-up camera. Instead it will have the selfie lens embedded in the bottom chin, which is just about thick enough, aping Xiaomi Mi MIX series technique. There’s no chin at the top whatsoever. This variant is for all those who don’t prefer the motorised pop-up front camera, and it’s priced at CNY 3,798 (roughly Rs. 40,000).

This variant is corroborated by another leak on Weibo that has shared photos of the Snapdragon 660 variant with the selfie lens housed at the bottom. This leak only shares pictures, and has no information on the pricing or other details. It shows a slight chin at the bottom of the smartphone housing the selfie lens.

The pop-up selfie camera on the Vivo Nex is said to sport an 8-megapixel sensor, and it is claimed to elevate from the body in just 0.8 seconds. The camera also reportedly includes an artificial intelligence (AI) algorithm and features such as smart optimisation, ultra-dynamic, multi-frame preferences, character optimisations, and natural tones. The Vivo Nex is said to have a System-in-Package (SiP) to deliver a Hi-Fi audio experience. There are also three amplifiers along with a built-in DAC (Digital-to-Analogue Converter).