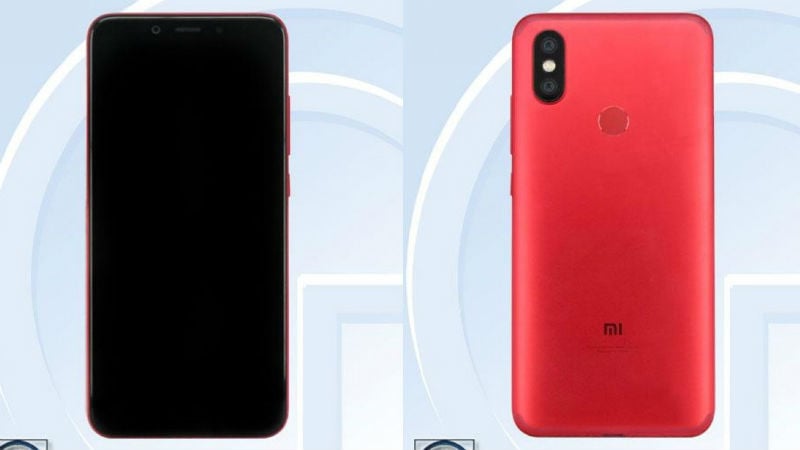 With the Redmi 5 launch done and dusted and Mi MIX 2S smartphone scheduled for launch on Tuesday, another Xiaomi smartphone has been spotted online. Images of an alleged Xiaomi Mi 6X or Mi A2 handset has been found in a Chinese certification website revealing some of the specifications of the smartphone. The rumoured smartphone is presumed to be available worldwide as Xiaomi Mi A2, the new version of the Mi A1 Android One handset. The company had launched the Mi A1 in China as Mi 6X running stock Android and being a part of the Android One initiative by Google.

As per a listing on TENAA, spotted by SlashLeaks, images and specifications of a smartphone bearing the model number M1804D2SE were showcased. The listing suggests that the alleged Xiaomi Mi A1 (Mi 6X) will sport a 5.99-inch display. The smartphone will be powered by a 2910mAh battery and the dimensions are given to be 158.88×75.54×7.3mm. From the images revealed in the listing, we can see a red coloured variant of the Xiaomi Mi A2 (Mi 6X).

When it comes to the design, the smartphone resembles the Redmi Note 5 Pro that the company launched earlier this year. The vertically aligned dual rear camera setup can be seen in the top left corner. Also present is also a circular fingerprint sensor at the back. The front panel appears to come with a selfie camera and an earpiece at the top of the handset.

Interestingly, the images suggest that the smartphone will sport a display with 18:9 aspect ratio, a welcome change from the Xiaomi Mi A1. It is also notable that the company may not go with the currently popular iPhone X-like notch in its handset.

While the TENAA listing does not reveal too many details about the smartphone, including specifications, we do know that it will run the Android OS. There is no clarity on whether Xiaomi will continue with the Android One that was seen on the Xiaomi Mi A1. When it comes to pricing, since the Mi A1 was launched in India priced at Rs. 13,999, we can expect the Mi A2 to be a budget smartphone as well.