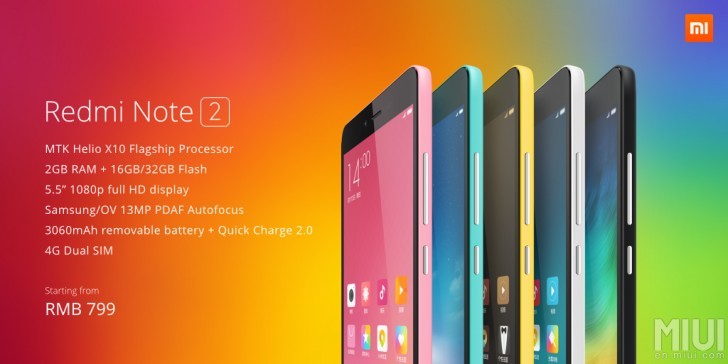 Xiaomi is making headlines yet again thanks to its seamlessly endless winning streak. With its aggressive pricing strategy and diversified portfolio the Chinese OEM has made a habit of shattering sales records (like with the Redmi 2 and 2A, which already have more than 13 million units sold) and shining bright on both domestic and international markets.

The latest such achievement comes courtesy of the Redmi Note 2. It was announced just over a month ago and managed to sell a whopping 800,000 units in just 12 hours during its first flash sale on the domestic market. That was definitely a record right there, but it turns out that interest has only been growing since and industry sources now claim that the handset has exceeded 1.5 million sales as of September 5.

That is undoubtedly an all-time best for Xiaomi and it is hard to believe that the company is managing to keep up with such a demand. At this rate, the Redmi Note 2 could easily cross the 10 million mark by the end of 2015, which definitively proves that the phone is a remarkably good deal. Actually, a price tag of just $125 for the 16GB and $156 for the 32GB model is still baffling, considering the rest of the specs sheet.

We are talking about a handset that features a MediaTek Helio X10 SoC with eight Cortex-A53 CPU cores, and a 5.5-inch 1080p display. It comes with 2GB RAM and packs in a 3,060mAh battery.

The Redmi Note 2 also features a 13MP rear unit and a 5MP front shooter. There is also dual SIM support, 802.11ac Wi-Fi, and IR blaster, and the device runs the new MIUI 7 out of the box. It also has a slick and clean exterior with nice and vibrant color choices such as Cyan, Yellow and Pink, alongside the traditional Black and White.

Bear in mind that like many other Xiaomi products, availability for the Redmi Note 2 is still limited to the local market (although it is listen on OppoMart for a few extra bucks), which means that the impressive results are achieved in one market alone. Naturally, there is huge potential for even greater sales on international markets, but that would require a great deal of work, a major manufacturing expansion and would inevitable ramp up the price. Still, Xiaomi’s Hugo Barra has hinted that entering the US market in on the cards, albeit not in the next year or so and the company is already expanding quite efficiently into the vast Indian market.