Its CEO is stepping down, and the iPhone, its most important product, is in a major slump. That’s bad news for Apple in the near-term — but a major opportunity for the Apple Store to take on an even bigger role for the company.

Apple (AAPL) built its stores to be the ultimate showroom for its latest products. Potential customers can go test out each Apple device. But that model faces a major challenge: iPhone sales fell 15% last quarter. People aren’t buying as many Apple devices, and they’re holding onto their old gadgets for longer than in the past. 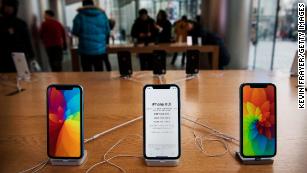 It’s clearer than ever Apple’s iPhone problem isn’t going away
Retail chief Angela Ahrendts announced Tuesday that she will be leaving the company. Now Apple must figure out how its 500 retail stores fit into its future.
“The stores need to reflect a changing Apple franchise,” said Daniel Ives, analyst at Wedbush Securities. “Some of that has been lost over the last few years.”

Apple does not disclose sales or foot traffic from its stores, but Ives estimated they make up around 25% of the company’s $265 billion in annual revenue.
The Apple Store remains a mega-success. It brings in more revenue per square foot than any other retailer — including Tiffany, according to eMarketer.
But the Apple Store depends too much on product launches, especially the iPhone, to draw customers, analysts say. Without a hot new iPhone or gadget, customers stay away from stores — unless, of course, their screen cracks.

Apple Fast Facts
“Apple stores only work when they have high demand, sexy products,” said Jason Goldberg, head of the commerce practice at digital agency SapientRazorfish.
Ahrendts tried to reduce Apple’s reliance on new hardware. She focused on turning stores into a “modern-day town square” with hands-on training sessions. Under Ahrendts, Apple entered cities like Dubai and Bankok and opened stores in high-profile destinations, such as Champs-Élysées in Paris.
“She was supposed to have changed the stores to more of a community, but I haven’t seen anything different in any of the stores,” said Sucharita Kodali, analyst at Forrester.
Ahrendts, who came from Burberry, tried to highlight Apple’s luxury status with stores. But the customer experience at stores remained the same, despite renovations and a higher-end feel, Kodali said.

Ahrendts successor, Deirdre O’Brien, will get a chance to reshape stores for the next era of Apple. O’Brien, Apple’s current vice president of human resources, will become “senior vice president of Retail + People.”
O’Brien should focus on improving customer service at stores, Goldberg argued: As Apple customers buy fewer iPhones, the stores’ Genius Bars serve as an opportunity for growth.
But wait times for Apple’s Genius Bar are often long and stores are overcrowded. Goldberg believes Apple should take a lesson from car dealerships, which separated their showrooms from service departments many years ago.
“Apple will probably have to move in that direction too,” he said.
Best Buy reinvented its stores by going all-in on customer service and tech support with Geek Squad. As retailers around it crumble, Best Buy has recorded six straight quarters of comparable sales growth above 4%. 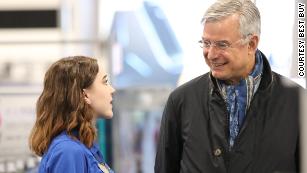 Best Buy CEO Hubert Joly has nothing to sell you
A career HR executive may seem like an odd fit to take over the top retail job. But if the Apple Store of the future focuses on customer service, people management experience may be what the new retail chief needs for the store to succeed.
Apple needs a retail strategy that uses stores to showcase the company’s future, Ives said.
That means displaying fewer iPhones and iPads and showing more original content. Apple is planning its own streaming service to rival Netflix and it is expected to launch this year. The company plans to make up for slowing gadget sales by selling services and content for iPhone customers.
More Genius Bar staff, a new layout and a new executive could transform Apple Store for a future where iPhone sales aren’t the main catalyst driving people into stores — but iPhone service and video content are.
[“source=edition.cnn”]