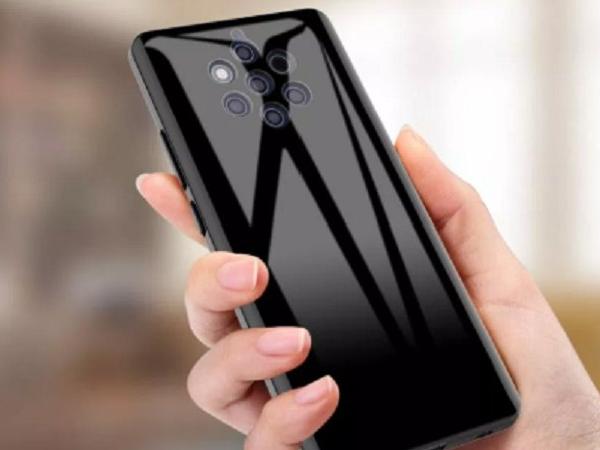 Nokia 9 PureView, HMD Global’s next flagship smartphone is most likely set to launch at the company’s February 24 launch event at the sidelines of MWC 2019. One of the biggest highlights of the new Nokia 9 PureView is the Penta camera setup which has been extensively leaked in recent weeks. With the Mobile World Congress 2019 just around the corner and HMD Global’s upcoming flagship model, Nokia 9 PureView can’t seem to stop surfacing on the Internet. The device has hit the rumour mill again, and this time live images of Nokia 9 PureView have been leaked. The upcoming device is expected to mark its debut on February 24 in Barcelona alongside the mid-range smartphone Nokia 8.1 Plus.

The new live images suggest that the Nokia 9 PureView will come in a large display, wide border and rounded edges while at the back, there will be a premium glossy black panel with Penta-lens camera setup. Additionally, the front panel of the device will come in 18:9 aspect ratio with sensors placed on the top left side of the thin bezels and Nokia branding on the right side of the device. The live images of the Nokia 9 PureView shared by NokiaPoweruser also gave us an idea of an LED flash and depth sensor placed in a circular design at the rear panel which appears to feature a glass sheet and glossy finish metal build.

On the other hand, past rumours have hinted that the device will arrive with a 5.9-inch HD OLED display, Qualcomm Snapdragon 845 coupled with massive 8GB of RAM and 128GB of storage, expandable via microSD card. Furthermore, the Nokia 9 PureView is tipped to come with IP68 water resistance rating and Nokia OZO Audio support while for battery, it may sport a beefy 4150mAh battery with wireless charging support.